Today I’m pleased to welcome Jacqueline Chadwick to the blog. Jacqueline will be known to many for her roles as Tina Dingle in Emmerdale and Linda Sykes in Coronation Street. Her first novel, In The Still, is published by Fahrenheit Press on 7 July  2017.

Jacqueline kindly answered a few of my questions.

1. Tell us a little about In The Still.

The central character of In The Still is a criminalist called Ali Dalglish specialising in two areas of expertise: criminal psychology and forensic pathology. Opting out of her career and immigrating to Canada has taken its toll on Ali’s marriage as well as her mental health leaving her feeling alienated and alone and far removed from the brilliant woman she had once been. When the body of a girl is discovered on a trail near Ali’s house she is compelled to assist and, since she has nothing to lose by placing herself at centre of the ensuing murder investigation, embarks upon the hunt for a brutal and determined predator. But Ali’s involvement in the case of ‘The Alder Beach Girl’ places her in the killer’s crosshairs, forcing her to do battle the only way she knows how; by entering his mind; the mind of a true psychopath.

I think the true inspiration came about as a result of moving to a quiet little municipality on Vancouver Island. It’s so tucked-away and private that — my mind being the twisted thing that it is — it struck me as the ideal place in which a serial killer could operate and never be noticed.

A bit of both, I have to have an idea of where the story might go, the core themes and characters but what I’ve found is that writing is a metaphor for life: you think you know what it’s all about and then it takes a turn you didn’t expect. Luckily, it’s the unexpected turns in both that excite me.

4. Being an actor you are obviously used to getting heavily involved with characters and storylines. How easy was it to transition from actor to author?

Well, it’s been many years since I worked as an actor so I can’t say there really was a transition but it really all boils down to the same thing: telling a story you hope others will find entertaining. Writing is a better fit for me because being an actor never really suited my personality, I’d much rather shut myself in a quiet room and work alone than stand in any sort of spotlight.

5. Which role would you love to play?

I’ve always been a sucker for playing ‘the bitch’ but even the thought of acting again brings me out in hives. The little girl in me would say Wonder Woman.

6. Have you imagined the cast for any screen adaptation of In The Still and if so who would be your dream cast?

That’s funny. This is my first novel and so I’m barely able to imagine how it will feel to see my work published. But now you’ve said it, I bet I’ll be fantasising about that one for weeks to come!

7. Why crime fiction? What do you think is its appeal, for both writers and readers?

Give me a story with a ‘bad guy’, a ‘good guy’, a chase, plenty of twists and turns, a few red herrings and an undercurrent of violence and I’m hooked, both as a reader and as a writer. I am fascinated by the destructive potential of human nature, the dark side of the human psyche and there is no better genre in which to explore the impact of those things than crime fiction.

I’m all about family. The perfect day is one spent with my husband, Simon, and my two kids, Alex and Jamie. I like to binge-watch whatever Netflix or Crave have to offer and my DVD collection is nothing short of astounding.

9. If you could only read one book for the rest of your life which book would it be?

10. I like to end my Q&As with the same question so here we go. During all the Q&As and interviews you’ve done what question have you not been asked that you wish had been asked — and what’s the answer?

As a writer, yours is only my second Q&A. What can I say? You’ve left me wanting for nothing so thank you! 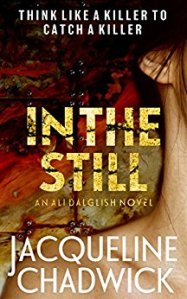 When Ali Dalglish immigrated to Canada she left behind her career as Britain’s most in-demand forensic pathologist & criminal psychologist.

Now, eight years later, Ali feels alone, and bored, and full of resentment. Suffocated and frustrated by her circumstances and in an increasingly love-starved marriage, Ali finds herself embroiled in a murder case that forces her to call upon her dormant investigative skills.

As she’s pulled deeper into the case of ‘The Alder Beach Girl’ and into the mind of a true psychopath, Ali is forced to confront her fears and to finally embrace her own history of mental illness.

In an increasingly febrile atmosphere Ali must fight hard to protect those she loves from the wrath of a determined and vicious predator and to ultimately allow the woman she once was to breathe again.

Jacqueline Chadwick was born in Stirling, Scotland. Working as an actress from the age of eleven, Jacqueline played roles in numerous theatre, film and TV productions. She was best known for her roles as Tina Dingle in Emmerdale and Linda Baldwin in Coronation Street. She left acting in 2001 and went on to found the Jacqueline Chadwick Academy of Performing Arts before finally immigrating to Canada in 2009 where she now works as a writer. Her debut novel, In The Still, published by Fahrenheit Press, is the first in a series featuring Ali Dalglish.