Today I’m pleased to welcome Kat French to the blog. Kat is the author of One Hot Summer, The Piano Man Project and My Perfect Stranger and her latest novel, The Bed and Breakfast on the Beach is published by Avon on 13 July 2017.

Today Avon have kindly given me permission to share an extract from The Bed and Breakfast on the Beach.

A few miles away in a small café with insufficient air conditioning, Frankie drew a line down the middle of a blank page of an exercise book and wrote ‘for’ and ‘against’ at the top of the two columns. It wasn’t exactly a spreadsheet, but its practicality was a comfort nonetheless.

Under ‘against’, she noted her only real sticking point; or two points, technically. Joshua and Elliott. Her beloved, boisterous boys, the reasons she’d put the last half of her own life on hold. It was hard to imagine that she’d given birth to them at the same age as they were themselves now; they were still her babies and the thought of them as fathers right now was utterly incomprehensible. Please let them have at least another ten years of freedom first, she murmured. Please let them make a million mistakes that don’t matter rather than one huge one that changes their lives for ever.

Tapping her pen against her teeth, she considered what to write next. There really wasn’t much she could think of to add to the ‘against’ column, and in truth the boys didn’t really need her around at home any more. Josh was living away at a sports academy for the most promising youth footballers in the country, and Elliott had won a hard-fought-for apprenticeship with one of the luxury car brands he coveted and moved into a shared house forty miles away. Fierce pride bloomed bright in her chest at the thought of how well they were doing; if there was one thing she was certain of it was that her sacrifices had been worth it, and that she’d do the same all over again to ensure that her kids were set on the right path.

After a second, she wrote ‘Marcia’ in the ‘for’ column, followed by ‘find an adventure’. Then she added ‘sunshine’, ‘friendship’, ‘new start’, ‘excitement’ and ‘not lonely any more’ to the list in quick succession. Her hand hovered over to the ‘against’ column to add ‘money’, but in fact going thirds on the villa had still left her with a decent chunk in the bank, so it really wouldn’t be accurate to put it down as an against, exactly. That made seven for, and two against. Quite definitive, really, even though the thought of living in a different country from Josh and Elliott made her feel queasy. Perhaps if she framed it in her mind as an exploratory trip, then it would be less of a wrench. Three months or so, and if she missed the boys too much, she could always come home again. She closed her book, laid her pencil neatly on top and unscrewed the lid from her bottle of water.

If the spreadsheet said it was a good idea, then it had to be right. 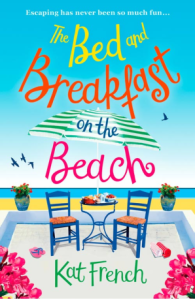 “A Greek island solves all life’s problems doesn’t it?

Winnie, Stella and Frankie have been best friends forever.
When their lives unexpectedly unravel, they spontaneously decide to buy a gorgeous B&B on a remote Greek island.
Drenched in hot sun, Villa Valentina is the perfect escape
from reality. But when Winnie meets Jesse, their brooding
neighbour, she finds that Greece is full of its own
complications not least how attractive he is

Meanwhile, Frankie and Stella are discovering that Villa Valentina has its own secrets starting with the large supply of gin in the cellar and the arrival of a famous rock band. A band with one very good-looking member who just might distract Frankie from thoughts of her husband

Smart, sassy and sexy, this summer sizzler is perfect for fans of Lucy Diamond and Jane Costello.”

Kat lives in England with her husband, two little boys and two crazy cats. She loves all things romance – reading it, watching it, and most of all, writing it. Mildly addicted to wine and fairy lights