Today I’m pleased to welcome Rob Sinclair to the blog. Rob is author of Dance with the Enemy, Rise of the Enemy and Hunt for the Enemy and his latest novels The Red Cobra and The Black Hornet were published by Bloodhound Books on 29 March 2017 and 9 June 2017.

Rob kindly answered a few of my questions.

1. Tell us a little about The Red Cobra and The Black Hornet

The Red Cobra is a follow-on to my Enemy books, but it picks up with the hero of those books, Carl Logan, in a new time and place and with a new identity – James Ryker. Although Logan got to a good point of closure at the end of the third Enemy book – Hunt for the Enemy – he was just too important to me to stop his story there. Because of that closure, though, I was also absolutely determined to make The Red Cobra a new start point. I’d already put Logan through so much in the three Enemy books that by the end of Hunt for the Enemy, it felt like it would be almost too implausible (even for thriller fiction!) to think of another connected (and concocted) scenario. So I had the idea of giving Logan a new identity, which is where James Ryker came from. Logan had run away from his old life anyway, so it made absolute sense that he wold have taken on a new identity too.

In terms of the plots, the themes running through both books (and the forthcoming third book, The Silver Wolf) is that no matter what Ryker does to escape his past, there are simply too many demons and too many enemies out there for him to ever achieve his aim.

The Red cobra sees Ryker pitted against a former adversary, an infamous female assassin (The Red Cobra!). Despite Ryker’s hiding, his ex-boss tracks him down and brings with him news of the murder of a woman in Spain, Kim Walker, whose fingerprints match those of the Red Cobra who’s been missing presumed dead for many years. But Ryker knew the elusive Red Cobra better than anyone, and when he sees the grisly pictures of Kim Walker’s corpse, he has news for Winter – she isn’t the assassin at all. That’s the set-up to bring Ryker out of hiding, with him intent on finding out who the mystery dead woman is, who killed her and why, and where the real Red Cobra is.

The Black Hornet then follows directly on from The Red Cobra (though is a distinct plot in its own right and can be read standalone). It sees Ryker, still reeling from previous events, on a personal mission to Mexico where once again his past comes back to bite him when he is set-up for the murder of a former informant, and thrown a crumbling jail run by The Black Hornet, the notorious leader of a Mexican drug cartel.

2. What inspired the books?

I tend to get just one or two big ideas for a book before I start drafting, so once I’ve finished and have quite a lengthy and complex plot in place it’s hard to unpick it and figure out where all the ideas came from. Initially, though, the idea for The Red Cobra came from a concept I had for the character herself. I’d long toyed with writing a book about a female assassin, and had an idea in my head as to what her backstory would be (which is told in this book through flashbacks to her childhood in post-Soviet Georgia). Suddenly it made sense to use that character for a Ryker book, and to have their past lives intertwined. Her resurfacing is the perfect pull to draw Ryker back out from his short-lived idyll.

As for the Black Hornet, again I’d long been interested in writing a book where a big element of the plot was based in a prison. I’ve loved films and books with prison settings for years, from Shawshank Redemption to Prison Break etc etc, and had this idea about how Ryker would react if he was imprisoned in a hellhole jail in a foreign country for a crime he hadn’t committed. The rest of the plot then just flowed around that.

3. How much research do you have to undertake when writing your novels? Do you plan all of the story or see where the words take you?

It’s a bit of both. I try to use lots of locations I’m familiar and often have an idea before I start the book of where the main settings will be. But that’s not always possible so I end up doing research as I go along mostly – and largely just on the internet – in order to get the look and feel of places right. Similarly if there are particularly elements of culture I’m trying to bring out and that I’m not familiar with then I tend to just research what I feel I need as I go along, e.g. for The Red Cobra that meant researching about the Mkhedrioni in Georgia, and for The Black Hornet it meant researching about drug cartels in Mexico and South America. I also have to research things like combat techniques, weapons, ways of interrogating and torturing and killing people, hiding and disposing of bodies… my google history is undoubtedly on many watch lists by now!

4. The Red Cobra follows on from your Enemy series featuring Carl Logan. What benefits are there to writing recurring characters and can they still surprise you?

The most obvious benefit is that I feel really in tune with his character now. He’s so familiar to me that it’s very easy to write a book with him in it, and the individual scenes feel very natural to me, whether it’s a conversation he’s in, or to figure how he’s feeling or how he’s going to react. So I’m not sure he does surprise me much any more. Not him personally, but certainly my plots do still surprise me. I can have a good idea before a day starts as to what I want to write that day, what the start and end points of a particular scene will be, but then as I start writing it just comes out completely different. I don’t know why that happens, but it does. It’s not a bad thing, but it does still surprise me whenever it happens!

I have two young boys (6 and 4) who, like most boys their age, are a real handful! I spend a lot of time with them, before and after school and weekends, so my writing week is quite short anyway really. Other than that I enjoy exercising several times a week and I’m a sucker for binge watching TV series. I started watching Sons of Anarchy a couple of weeks ago and I’m onto season 4 now! I’d love to say I sit back and read all the time but when my brain is frazzled from writing and from the kids it’s just so much easier to stick a boxset on and slump on the sofa and let my head rest.

An encyclopaedia! Much longer than any fiction book and I’ve always loved facts and stats and finding out about things. I don’t actually read much non-fiction normally, but if you’re only giving me one book then I’ll go with a big one that I know will keep me entertained for the longest!

I’ve done so many interviews it’s quite hard to remember what I’ve been asked to be honest! But I don’t think I’ve ever been asked what’s my favourite food, and I’m really hungry writing this so that springs to mind. And the answer is, without doubt, Indian food and curries. I’d eat it every day if my wife would let me! 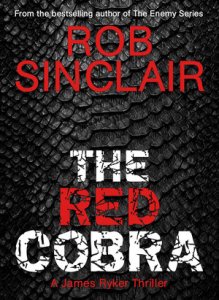 “Carl Logan dedicated nearly twenty years of his life to the Joint Intelligence Agency. Now living in a secret location, under the new identify of James Ryker, he wants nothing more than to be left alone, the chance to start a new life away from chaos, violence, destruction and deceit.

It’s not long, however, before Ryker’s short-lived idyll is destroyed when he is tracked down by Peter Winter, his ex-boss at the JIA. Winter brings with him news of the murder of a woman in Spain, Kim Walker, whose fingerprints match those of one of Ryker’s former adversaries who’s been missing presumed dead for years – an infamous female assassin known as the Red Cobra.

A cyberattack at the JIA led to the Red Cobra’s profile being compromised, and Winter believes JIA agents may now be at risk too, Ryker included. But Ryker knew the elusive Red Cobra better than anyone, and when he sees the grisly pictures of Kim Walker’s corpse, he has news for Winter – she isn’t the assassin at all …

So just who is the mystery dead woman? And where is the real Red Cobra?

The Red Cobra is a fast-paced thriller filled with twists and turns and intrigue that will appeal to readers of big-hitting thrillers by the likes of Lee Child and David Baldacci, and with echoes in its plotting and breadth of the globe-trotting spy thriller I Am Pilgrim.”

“What do you do when the love of your life vanishes without a trace? If you’re ex-intelligence agent James Ryker you search for the answers whatever the cost, however much blood and sacrifice it takes…

Six months ago Lisa was taken from Ryker, and he’ll stop at nothing to find out who is responsible and why. Following a trail to Mexico, the ex-Joint Intelligence Agency asset soon finds himself in the firing line of enemies he long thought he’d left behind. Set-up for the murder of a former informant, Ryker is thrown into a crumbling jail run by The Black Hornet, the notorious leader of a Mexican drug cartel. But what connects the cartel to the informant’s murder, and to Lisa’s disappearance? And just who is the mystery American claiming he can help Ryker in his hour of need?”

Rob is the author of the critically acclaimed and bestselling Enemy series of espionage thrillers featuring embattled agent Carl Logan. Together the explosive series (comprising Dance with the Enemy, Rise of the Enemy and Hunt for the Enemy) has now sold more than 150,000 copies worldwide. His work has been praised for its relentless pace, multiple twists and breathtaking action.

Although Rob has more Logan books in the pipeline, his upcoming release with Bloodhound Books marks a slight change in direction, moving away from pure action thrills to psychological suspense (albeit still with a healthy dose of action!).

Rob began writing in 2009 following a promise to his wife, an avid reader, that he could pen a ‘can’t put down’ thriller. He worked for nearly 13 years for a global accounting firm after graduating from The University of Nottingham in 2002, specialising in forensic fraud investigations at both national and international levels. Rob now writes full time.

Originally from the North East of England, Rob has lived and worked in a number of fast paced cities, including New York, and is now settled in the West Midlands with his wife and young sons. (from  the Bloodhound Books website)