Today I’m pleased to welcome Georgia de Chamberet to the blog. Georgia is the editor of Lesley Blanch’s Far to Go and Many to Love which was published by Quartet Books on 1 June 2017.

Georgia kindly answered a few of my questions.

1. Tell us a little about Far To Go and Many To Love.

Far To Go and Many To Love is a collection of writing by Lesley Blanch bringing together a selection of early journalism, biographical sketches, and traveller’s tales. The title is taken from her introduction to On the Wilder Shores of Love: A Bohemian Life.

After Lesley’s death in 2007, the late Susan Train, Dana Wynter and Mireille Dagostin spoke candidly to me about her married life with diplomat-novelist Romain Gary; and her work as a freelance journalist for Diana Vreeland, editor-in-chief of American Vogue in the 1960s. Lesley’s artist’s portfolio came to light in 2014, illuminating her first career after leaving The Slade working as a theatre designer with her mentor and lover, Russian émigré director, Theodore Komisarjevsky. She only ever referred to him as ‘The Traveller’. He is the subject of an early memoir, Journey into the Mind’s Eye, written in the 1960s when the label ‘creative non-fiction’ did not exist. Like Rebecca West and Truman Capote, Lesley was experimenting with different forms and techniques to tell a damn good ‘true’ story.

Lesley remembers life in post-war Bulgaria with Romain Gary, and escaping Christmas in Hollywood with him in Mexico, where he began to write Promise at Dawn. Specific places held a particular significance: the Sahara, Iran, Turkey, Syria, Afghanistan, Central Asia. Her descriptions make for disturbing reading given the cumulative impact of a century of war on the Middle East.

Her impressions of people and places have an enduring intensity and she writes of them as vividly as she does her own experiences. We see rising stars Vivien Leigh and Peter Ustinov in 1940s London, and war reporter Germaine Kanova, the ‘French Lee Miller’; the last great Ruritanian Queen Marie of Rumania in her Balkan setting; Lise Christiani the young cellist impelled by her unquenchable desire to journey across Siberian wastes, whatever the cost; Pierre Loti in Turkey a.k.a. Loti-land.

Lesley and my mother, Gael Elton Mayo, met in New York in 1951 through their Russian husbands. As far as godmothers go, Lesley Blanch was as good as it gets. Everything about her was unconventional and romantic. I loved visiting her in the South of France.

From 2001, I worked intermittently with Lesley, transcribing her handwritten anecdotes on to an old laptop kept on the top shelf of her cupboard during my visits. I became fascinated by the many lives she had led and the different worlds she had known. Her memoirs, On the Wilder Shores of Love: A Bohemian Life, were published posthumously by Virago in 2015. We had also discussed putting together a selection of Lesley’s writing — hence this book.

3. What does your role as editor entail?

I worked as an editor for eight years with Stephen Pickles and the late Anthony Blond at Quartet Books before founding BookBlast Ltd, in 1997.

Writing is an act of seduction. A writer and an editor working together on a book is like an affair, involving intimacy and trust. The editor is totally committed to the book, does everything possible to help the writer make it the best they can; and then they do everything possible to give the book and its author the greatest chance of success when published. After Lesley died, I was determined to complete the work we had started, and carry out her vision – made a little easier by her making me her literary executor.

4. When editing the book how did you decide what to include? What guided you?

I was guided in part by what had been discussed with Lesley before she died in 2007 at the age 103, and in part by what felt relevant to now. Her life spanned the greater part of the twentieth century. Although she was of another era, this never really occurred to me when she was alive, since she had a youthful enthusiasm for life and was genuinely open-minded and avant-garde in spirit. She was mischievously funny and a wonderful storyteller.

Lesley connected past and present. Her storytelling was underpinned by a vivid imagination and scholarly research. She opened windows on to many worlds, and I am grateful to her for what she taught me about Russian and Islamic culture and history, (I treasure her copy of The Koran). Context is important. Thanks to her, I learned to take the long view.

As features editor of British Vogue from 1937–44 Lesley was on the front line of women journalists writing about women. Later, in her biographies, she invariably wrote about women doing their own thing. Her approach to the distant past and her own present is romantic and dramatic. She was the last in a long line of romantic English woman travellers who fell in love with the East, and went off, enduring all kinds of living conditions and experiences: just like the women she wrote about!

5. What do you think it is about Lesley’s works that make them appealing today?

Lesley Blanch was a trailblazer. She did her own thing against the odds, choosing to fulfil the potential of her own nature and escape from strait-laced Edwardian suburbia to become a working woman at a time when few women had careers. She had a soft spot for Russian men, was very open-minded and a true internationalist. Her approach to the distant past and her own present is romantic and dramatic.

The author of twelve books, Lesley’s writing brings to life something of Russia and the Middle East as they once were, before war and terrorism became the norm. She was ahead of her time, and prescient in the way she attempted to bridge the West and East. Most people today associate her with The Wilder Shores of Love, her best-known book about four nineteenth-century women who travelled east, escaping the boredom of convention as she liked to put it. The book pioneered a new approach to history writing.

But her greatest work is The Sabres of Paradise: Conquest and Vengeance in the Caucasus. The way she writes about the struggle of the people of the Caucasus to remain independent of Russia is dramatic and disturbingly relevant to our world today. As Philip Marsden wrote in his introduction: “Like Tolstoy’s, her sense of history is ultimately convincing not because of any sweeping theses, but because of its particularities, the quirks of individuals and their personal narratives, their deluded ambitions, their vanities and passions.”

6. How would you describe Lesley’s works to someone not familiar with her in one sentence?

Gripping high-octane historical drama, not for the faint-hearted. 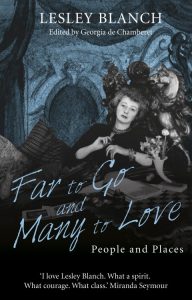 Lesley Blanch, a Londoner by birth, spent the greater part of her life travelling about those remote areas her books record so vividly. She was an astute observer of places and people their quirks, habits and passions. This selection of her early journalism, essays and traveller’s tales forms an irresistible sequel to her posthumous memoirs, On the Wilder Shores of Love: A Bohemian Life. Savvy, self-possessed, talented and successful, Lesley Blanch was a bold and daring writer; travelling at a time when women were expected to be subservient to the needs of husbands and children. Illustrated with photos and a selection of Blanch’s line drawings and with an insightful introduction by Blanch’s god-daughter, Far to Go and Many to Love: People and Places brings together writings on subjects as various as Vivien Leigh, polygamy and the Orient Express. She remembers life in post-war Bulgaria with her husband, the diplomat-novelist Romain Gary, and Christmas in Mexico with him. Specific places were of particular significance to her: the Sahara, Iran, Turkey, Syria, Afghanistan, Central Asia. Her descriptions make for disturbing reading given the cumulative impact of a century of war on the Middle East.