Today I’m pleased to welcome Sharon Bolton to the blog. Sharon is the author of Little Black Lies, Now You See Me, Dead Scared, Like This, Forever, A Dark and Twisted Tide, Sacrifice, Awakening and Daisy in Chains and her latest novel, Dead Woman Walking, was published by Bantam Press on 20 April 2017.

Today Sharon has written about why she chose to have a nun as one of her characters.

I learned something writing Dead Woman Walking: it isn’t possible to write a nun into a scene without her taking it over. I have four main characters in the book: a police superintendent, a gypsy, a detective and a nun.  Isabel Jones, aka Sister Maria Magdalena, is a Carmelite sister living in a silent, enclosed order.

During the opening chapters I deliberately disguised her religious calling, knowing it would prove a distraction to the set piece of a hot air balloon disaster. I wanted my readers focusing on what the passengers see from the balloon, their panic at being powerless to stop a murder taking place on the ground, their terror when the pilot is killed and the balloon floats out of control.

I needed them to share the bewilderment and horror of the story; I couldn’t have them asking what on earth a nun is doing in a hot air balloon? And why is she a nun anyway? So I referred simply to her black dress and quiet demeanour. Only later, when the investigating officers see the passenger manifest, when they find a habit-clad body on the ground, do they realize that one of their deceased was a most unusual passenger.

Later that day, when Superintendent Maldonado goes to inform the priory of Sister Maria Magdalena’s death, we meet the formidable Mother Hildegard, who intimidates even this most senior police officer. What is it, I got to wondering, about the black robes, the white veils, that give otherwise ordinary, elderly women such an air of untouchable authority?

As the story unfolds, and through a series of flashbacks and memories, we meet more of the nuns and I learned something else. It is impossible to write about a group of nuns and not make them humorous. Whether it is their devotion to their pet peacocks, their fascination with all things gory or their frolics in the north sea, the nuns of Wynding Priory became the light relief in my story, colouring and enriching it with their foibles and eccentricities, their warmth and their dogged loyalty to their friends. Seeing this group of innocent, elderly ladies turn into enthusiastic crime fighters was one of the joys of my writing career.

And still, I wondered, why do these women of the veil fascinate us so?

We can’t help but be curious. What do they do all day? They cannot spend their every waking hour in chapel and there is only so much cleaning of the priory to keep them occupied. Not every religious house has the trademark liqueur, beer or honey.  The more I thought about the possible secret lives of nuns, the more intrigued I became.

And then, driven as they are to eschew worldly pleasures, their lives are so very different to our own. Nuns turn their backs on everything in life that, for the rest of us, makes it worth living: family, a wide circle of friends, romantic love, sex, possessions, good food, entertainment. Most of us simply cannot understand what drives someone to commit to a religious life.

And of course, we tend to fear what we don’t understand. There is something a little fearful about the nun. Her flowing black robes, the white veil around her pale serious face. The solitary nun, not quite of this world, is a theme that runs through many ghost stories.

At the end of the day, there is just something about this enclosed, ordered life, where different rules and customs apply, that makes us decidedly nervous. We can have no means of knowing what really goes on behind those high stone walls. A religious order is a community apart, and we venture amongst it at our peril. 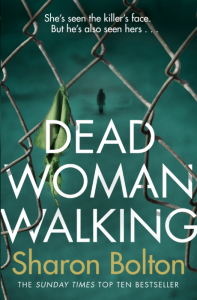 Just before dawn in the hills near the Scottish border, a man murders a young woman. At the same time, a hot-air balloon crashes out of the sky. There’s just one survivor.

She’s seen the killer’s face – but he’s also seen hers. And he won’t rest until he’s eliminated the only witness to his crime.

Alone, scared, trusting no one, she’s running to where she feels safe – but it could be the most dangerous place of all . . .
Read more on the Penguin website.

Sharon Bolton (previously S. J. Bolton) is the critically acclaimed author of some of the most bone-chilling crime books ever written. She has been shortlisted for the CWA Gold Dagger for Crime Novel of the Year and the Theakstons Old Peculier Crime Novel of the Year. In 2014 she won the CWA Dagger in the Library for her whole body of work.

Sharon lives near Oxford with her husband and young son.

You can read my reviews of previous books by Sharon Bolton by clicking on the titles.

Now You See Me

A Dark and Twisted Tide