Today I’m pleased to welcome Harriet Cummings to the blog. Harriet’s debut novel, We All Begin As Strangers is published by Orion on 20 April 2017.

Like most kids, I was told lots of stories growing up. Many of these I later forgot, while others stayed with me into adulthood.

We might wonder: what makes some stories so memorable? Arguably it’s simply that they’re the best, most powerful ones. But maybe there’s more to it than that.

Interesting fragments of ideas and characters can linger at the backs of our minds without us knowing exactly why. For me, a story that has kept returning to my thoughts over the years is that of ‘The Fox’, a real-life man who broke into the homes of villagers across the area of Buckinghamshire and The Chilterns, where my parents live, during the summer of 1984. I was born in July that year but was, of course, unaware of these frightening episodes until a few years later. Growing up, I heard stories of how this mysterious figure hid in back rooms for hours while families watched TV or ate dinner, before he disappeared into the night. People would later find their photographs and possessions had been looked through but nothing taken. They didn’t know who he was or what he wanted.

Later in life I misremembered this story, however. Or maybe I was never quite told it in full. More recently – when talking to an old friend from school – I realised The Fox didn’t just watch people. On occasions he raped women and one time shot a firearm, injuring someone’s hand. Of course I thought very differently about him after that. There’s no excusing what he did. Yet the nature of his voyeurism – that he felt the need to be in homes, watching and listening to family life – still fascinated me. Why was he drawn to villagers’ homes? Was he always a troubled person or did he become this way?

These were the questions that formed the beginnings of We All Begin As Strangers, inspired by my own impression of The Fox while growing up. It’s in no way a historical book (it doesn’t include the awful, violent attacks) but, rather, one that borrows ideas and details from real-life and abstracts from these to create a new story and set of characters. I found delving into my childhood memories this way made for really fertile ground. After all, us authors work on a book for months or years – the subject it covers must be a powerful one for us. And what’s more powerful than something that’s been in our thoughts for decades? 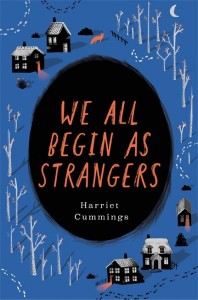 “Inspired by true events – a beautiful debut about an English village pushed to the brink, and the secrets its residents are desperate to protect.

It’s 1984, and summer is scorching the ordinary village of Heathcote.

A mysterious figure is sneaking into homes through backdoors and open windows. Dubbed ‘the Fox’, he knows everything about everyone – leaving curious objects in their homes, or taking things from them. When beloved Anna goes missing, the whole community believes the Fox is responsible. For the worried residents, finding Anna will be difficult – but stopping the Fox from exposing their darkest secrets might just be impossible… Inspired by a real 80s mystery, and with pitch-perfect characters, WE ALL BEGIN AS STRANGERS is a beautiful debut novel you’ll want to recommend to everyone. The ideal read for fans of THE TROUBLE WITH GOATS AND SHEEP and ELIZABETH IS MISSING.” 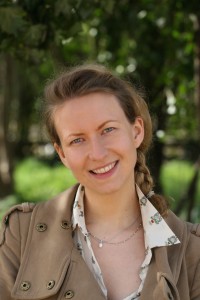 Harriet Cummings is a freelance writer with a background in history of art and gender studies. As a script writer, she has had work performed at Edinburgh Fringe Festival, as well as independent venues around London.  While studying at Faber Academy, Harriet threw herself into her first novel and hasn’t looked back since. WE ALL BEGIN AS STRANGERS is inspired by real events that occurred the summer that Harriet was born in the village where her parents still live. Residents in Leighton Buzzard, Dunstable, Tring and other surrounding villages still discuss the summer of 1984 and the legend of ‘the Fox’.

She now lives in Leamington Spa with her husband and springer spaniel. Follow Harriet on Twitter @HarrietWriter or find out more at http://www.harrietcummingsauthor.com