Today I’m pleased to share with you an extract from Perfect Remains by Helen Fields which was published by Avon books on 26 January 2017 and both Helen and Avon have given me permission to post this extract.

Mrs Yale could be heard before she was seen, yelling at her husband to let Callanach and Tripp in, as she controlled an Airedale Terrier who appeared more hungry than friendly. She was large, in her late seventies and obviously excited by the attention.

‘Don’t mind Archie,’ she fluttered. ‘Sit yourselves down. Michael will fetch us tea, won’t you, dear?’ Her husband shuf­fled dutifully away.

‘Isabel,’ she said. ‘Would you like biscuits with your tea?’

‘No, thank you. You saw a man leaving the road with a case. Can you describe him again?’ Callanach asked.

‘There wasn’t much to see, I’m afraid. It was dark and cold. He was wearing a long coat, grey or black, a woolly hat and a scarf right up over his mouth. He was all shadows, my darlin’.’

‘You noticed a case?’ he prompted.

‘Yes, a big thing. I hate the sound those wheels make.’

‘Can you describe it in more detail?’ Tripp asked, taking a tea cup from the tray.

‘It was soft, like a giant rucksack rather than one of those hard ones. Heavy too, by the look of him pulling it. It was black, with lots of zips. Didn’t see any labels, I’m afraid.’

‘You seem to remember more about the case than the man, if you don’t mind my saying,’ Tripp commented.

‘That’s because I was closer to it. I was bending down as the man came past me, bagging Archie’s doings. My first thought was what shiny shoes the man had. You don’t see many gentlemen that bother these days. Black lace-ups. Not really the best thing in this weather.’

‘Anything else, Mrs Yale? Anything at all?’ Callanach said.

‘I hadn’t realised I’d seen anything of note.’ She fussed over biscuit crumbs. ‘But there was a faint smell about him. I don’t

suppose many would recognise it nowadays, but I’m sure it was mothballs.’

‘You hang them in closets to stop moths from eating your clothes. Not very common any more.’

‘L’antimite. You’re sure?’ Callanach double-checked with Mrs Yale as she fed crumbs to the ravenous Archie.

‘It was the smell of my childhood, Mother swore by them. We couldn’t afford new clothes during the war, dearie, so we jolly well looked after those we had.’ 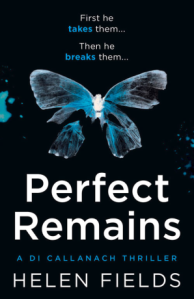 The first in a nail-shredding new crime series. Fans of M.J. Arlidge and Mo Hayder will be gripped from start to finish.

On a remote Highland mountain, the body of Elaine Buxton is burning. All that will be left to identify the respected lawyer are her teeth and a fragment of clothing.

In the concealed back room of a house in Edinburgh, the real Elaine Buxton screams into the darkness

Detective Inspector Luc Callanach has barely set foot in his new office when Elaine’s missing persons case is escalated to a murder investigation. Having left behind a promising career at Interpol, he’s eager to prove himself to his new team. But Edinburgh, he discovers, is a long way from Lyon, and Elaine’s killer has covered his tracks with meticulous care.

It’s not long before another successful woman is abducted from her doorstep, and Callanach finds himself in a race against the clock. Or so he believes The real fate of the women will prove more twisted than he could have ever imagined.

Fans of Angela Marson, Mark Billingham and M. J. Aldridge will be gripped by this chilling journey into the mind of a troubled killer.