Today I’m pleased to welcome G X Todd to the blog. Her debut novel, Defender, was published by Headline on 12th January 2016.

Today she is talking about the films she loved last year and those she is looking forward to this year.

I’ve watched a lot of films in 2016—I watch a lot of films most years (I always call myself a movie buff whenever anyone asks me about hobbies)—but I’m going to try and keep this list from turning into War and Peace and pick what I believe is the best film in each genre. If possible. Let’s see how we go.

Every so often a film comes along that makes such an impact it leaves you thinking for days afterwards. There have been two films this year that have done that and this is the first. I won’t go into plot details (that’s what IMDb is for), but suffice to say this film tackles some very disturbing allegations surrounding the child molestation cases brought up in Boston about the Catholic Church in the early 2000s. The fact this story is based on real events is what makes it so hard to watch. It also makes it an extremely important piece of filmmaking that everyone should see. I remember reading the information that appeared on the screen at the close of the film, and just feeling tears run down my face. Powerful stuff. There’s a reason it won the Oscar for Best Picture and Best Original Screenplay.

I watched this again recently and was able to sit back on the second viewing and really appreciate everything first-time director Dan Trachtenberg achieved with this film. It could be argued it’s the best piece of claustrophobic, single-location film-making of recent years. Amiable John Goodman, who most of us associate with his comedy roles, plays Howard (an ambiguous saviour figure who see-saws from bad guy to good every ten minutes) with such skill you never know whether to trust him or not.

Mary Elizabeth Winstead is the perfect heroine here. She’s real and raw and totally believable as the everyday woman (albeit an everyday woman who remains gorgeous to look at even after being locked in a bunker for weeks on end without a beauty regimen). She’s scared, and rightly so, but she’s resilient with it. She doesn’t have overly much dialogue, but she emotes so much with her eyes it doesn’t even matter. And that ending. Wow. It splits audiences, I know, but I freaking loved it.

Come on, this movie is hilarious! And beings I haven’t seen that many films over the past twelve months that can be classed as comedy, this is all you’re gonna get. Ryan Reynolds was made to be Deadpool. His superhero’s bawdy humour might not be for everyone—and it does miss its mark a time or two—but when it hits home, oh man, it’s glorious. I did find the general story and the character’s arc to be wholly uninspired in the grand scheme of things, but the originality of the character and how Reynolds brings him to the big screen is what makes this a winner. As long as you’re not easily offended by crudeness and graphic violence, this really is a must-see.

I was going put Zootropolis here, because I did really enjoy it. I think Disney nailed it on the head with choosing to spotlight a strong, hard-working female character in Judy Hopps. But I just didn’t love it. You know?

What I did love was The Little Prince on Netflix, despite its arguably weaker ending. It was so beautiful! It was the second animated feature I’d seen that utilised stop-motion action (the other being Kubo and the Two Strings). The Little Prince is a mix of both stop-motion and standard animation, but it’s the stop-motion that really blew me away, and it was the fantastical story told in those segments which really resonated. The story of the Little Prince and his fox sidekick was wonderful. It’s making me want to watch it again simply from writing about it…

With stellar voice acting by the likes of Jeff Bridges and Rachel McAdams, this is a top class production, which not only treats the eyes to its visual splendour but tugs at the heartstrings with its message about acceptance, family and how to find our place in the world.

“Tarzan?!” I hear some of you cry in derision. Yes! Tarzan! Hush, I liked it. I also bought it on Blu-ray, and not solely to pause the footage when Alexander Skarsgård takes his shirt off for the first time. No, it’s a fun romp, with excellent action set-pieces and a central love story that transcends all time and space! Margot Robbie is suitably feisty and pugnacious as Jane, too. What’s not to like?

I’ve won you back after picking Tarzan, haven’t I? How can I like Tarzan and then pick Arrival, you ask? Because I’m a complex individual with hidden depths, that’s why.

Arrival is a cerebral, slow-paced discovery of a movie, and it’s that second film I mentioned (see Spotlight above) which impacted on me so much I’m still thinking about it now. The way it plays with time, and how it then reveals how it played with time, is majestic. Amy Adams is also majestic in how understated and multi-layered her performance is. She really is on top of her game here (although she is in most everything she’s in). And all that linguistic stuff! Man. So clever.

Arrival isn’t showy and it’s not action-packed, but what it is is complex with many hidden depths. Just like me.

Movies hitting in 2017 to be excited about

Guardians of the Galaxy Vol. 2 (Chris Pratt. That is all.)

Logan (I’m really liking the direction this is going in with an old, gnarly-looking Wolverine.)

Alien: Convenant (ALIENS IS MY FAVOURITE FILM OF ALL-TIME.)

Wonder Woman (Oh my god, I’m scared they’re gonna mess this one up.)

Beauty and the Beast (My childhood literally coming to life.)

The Ghost in the Shell (I’m excited even with Scarlett Johansson being top billing.)

Valerian and the City of a Thousand Planets (I’m hoping Luc Besson is back on Fifth Element form with this one.)

Split (James McAvoy playing a man with twenty-four distinct split personalities. Colour me intrigued, Mr Shyamalan. You have another chance here to redeem yourself.)

God Particle (The third, and possibly final, part in the Cloverfield Anthology movies.)

Annihiliation (Based on the first book in Jeff Vandermeer’s Southern Reach Trilogy. The screenplay is written by Alex Garland and stars Natalie Portman and Oscar Isaac. One to watch out for.)

Okja (the second American produced film by Joon-ho Bong, the guy who brought us The Host and the crazy brilliant Snowpiercer. Joy of joys, Tilda Swinton, is starring, too.) 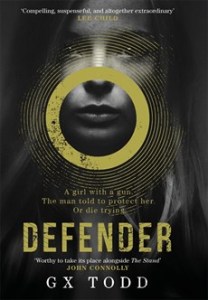 ‘On the cusp of sleep, have we not all heard a voice call out our name?’

In a world where long drinks are in short supply, a stranger listens to the voice in his head telling him to buy a lemonade from the girl sitting on a dusty road.

The moment locks them together.

Here and now it’s dangerous to listen to your inner voice. Those who do, keep it quiet.

These voices have purpose.

And when Pilgrim meets Lacey, there is a reason. He just doesn’t know it yet.

Defender pulls you on a wild ride to a place where the voices in your head will save or slaughter you.