Today’s first suggestion is from Susmita Bhattacharya, author of The Normal State of Mind. Her suggestion is The Village by the Sea by Anita Desai, published by Puffin. 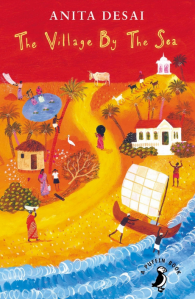 “A story of survival set in a small fishing villlage near Bombay. Lila and Hari, aged 13 and 12, struggle to keep the family, including two young sisters, going when their mother is ill and their father usually the worse for drink. When Hari goes to Bombay to find work, Lila seems to be responsible for everything. Although the book paints a picture of extreme poverty, it demonstrates the strength of the family even in the most extreme circumstances and offers a powerful picture of another culture.”
Read more on the Puffin website.

“I love Anita Desai’s The Village by the Sea. It was part of our school syllabus 25 years ago, but even now, it draws me in. The story, about two young children surviving in the big, bad city of Bombay (as it was called then) still has a charm that has not quite diminished. It is a pleasure to read it with my children, as the themes cross continents and cultures. And Anita Desai is one of my favourite writers.”

The second suggestion is by Kate Frost, author of The Butterfly Storm. Her suggestion is Peace Like a River by Leif Enger, published by Black Swan.

“When Israel Finch and Tommy Basca, the town bullies, break into the home of school caretaker Jeremiah Land, wielding a baseball bat and looking for trouble, they find more of it than even they expected. For seventeen-year-old Davey is sitting up in bed waiting for them with a Winchester rifle. His younger brother Reuben has seen their father perform miracles, but Jeremiah now seems as powerless to prevent Davey from being arrested for manslaughter, as he has always been to ease Reuben’s daily spungy struggle to breathe. Nor does brave and brilliant nine-year-old Swede, obsessed as she is with the legends of the wild west, have the strength to spring Davey from jail. Yet Davey does manage to break out. He steals a horse, and disappears. His family feels his absence so sorely, the three of them just pile into their old Plymouth, towing a brand new 1963 Airstream trailer, and set out on a quest to find him. And they follow the outlaw west, right into the cold, wild and empty Dakota Badlands. Set in the 1960s on the edge of the Great Plains, PEACE LIKE A RIVER is that rare thing, a contemporary novel with an epic dimension. Told in the touching voice of an asthmatic eleven-year-old boy, it revels in the legends of the West, resonates with a soul-expanding sense of place, and vibrates with the possibility of magic in the everyday world. Above all, it shows how family, love, and faith can stand up to the most terrifying of enemies, the most tragic of fates” (Image and synopsis from Amazon)

“He’s only written two books and this was his debut and a stunning one it is. Set in Minnesota and North Dakota in the 1960s and told from the perspective of Reuben, an asthmatic nine year-old boy, it’s in turn evocative, heartbreaking and uplifting and the characters simply ooze off the page, particularly Reuben’s nine year-old sister, Swede. It was one of those rare books that I kept thinking about when I wasn’t reading it and the characters and story haunted me long after finishing the last page.”

So there we have it, two more books that may have passed you by, but which could find a home on your bookshelf. Do let me know if you’ve uncovered any hidden gems that you think should be more widely read.