Today I’m pleased to share with you an extract from Runemarks, the latest novel by bestselling author Joanne Harris.

You can read yesterday’s extract on bookslifeandeverything.blogspot.co.uk.

That spark. That was the only true magic involved. Anyone

familiar with the runes – which were only letters, after all, taken

from an ancient language – could learn to write them. The trick,

Maddy knew, was to set them to work.

It had been difficult at first. Now, working the runes was easy

as striking a match. She spoke a little cantrip – Cuth on fyre . . .

The letters flared for a few seconds, and then dwindled to

a warning gleam. The goblins could see them – and so could

Maddy – but to Mrs Scattergood, who despised reading (because

she could not do it) and who thought magic was the

devil’s work, the runes would only ever look like scratches in

the dirt, and they could all continue to pretend that the goblins

Suddenly there came a scrabbling sound from the far, dark

corner of the cellar. Maddy turned and saw a movement in the

shadows and a shape, rather larger than a common rat, bob

away between two of the barrels.

Quickly she stood up, lifting her candle so that its fl ame lit

up the whitewashed wall. No sound could be heard; nothing

moved but the shadows that jerked and juddered.

Maddy stepped forward and shone the candle right into the

corner. Still nothing moved. But every creature leaves a trail

that only a few know how to see. There was something there;

Maddy could feel it. She could even smell it now: a sour-sweet,

A drunken party, she thought again. So drunken, perhaps, that

one of the revellers, stupefied beyond all thought of caution

by Mrs Scattergood’s excellent ale, had curled up in some dark

corner to sleep off the after-effects of a bellyful. And now it was

trapped, whatever it was. Trapped behind a drift of stacked ale

Maddy’s heart began to beat a little faster. In all these years

she had never had such a chance: to see one of the Faërie at

close quarters; to speak to it, and have it answer.

under Red Horse Hill. They were curious creatures, more playful

than bad; fond of strong drink and well-dressed meats. And

wasn’t there something else as well, something that lingered

tantalizingly on the edges of memory? A tale of One-Eye’s, perhaps?

Or maybe some more practical trick, some cantrip to help

her deal with the thing?

the corner. ‘I know you’re there,’ she whispered softly.

Nothing moved; just layers of shadow disturbed by the

candle-flame. She gave a sigh, as if of disappointment, and

turned to face the other way.

In the shadows, something lurked; she could see it from the

corner of her eye.

She did not move, but stood, apparently lost in thought. In

the shadows, something began to crawl, very quietly, between

Still Maddy did not stir. Only her left hand moved, fingers

curling into the familiar shape that was Bjarkán, the rune of

If it was a rat, Bjarkán would show it.

It was not a rat. A wisp – just a wisp – of Faërie gold gleamed

in the circle of her finger and thumb.

Maddy pounced. Her strike was well timed. At once the creature

began to struggle, and although Maddy couldn’t see it, she

could certainly feel it between her hands, kicking and twisting

and trying to bite her. Then, as she continued to hold it fast, the

creature finally went limp; the shadow dropped away from it,

and she saw it clearly.

Joanne Harris is the author of the Whitbread-shortlisted CHOCOLAT (made into an Oscar-nominated film starring Juliette Binoche and Johnny Depp) and many other bestselling novels. Her hobbies are listed in Who’s Who as ‘mooching, lounging, strutting, strumming, priest-baiting and quiet subversion’. She plays bass guitar in a band first formed when she was 16, is currently studying Old Norse, and lives with her husband and daughter in Yorkshire, about 15 miles from the place she was born. 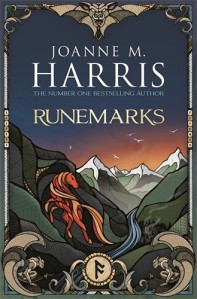 “A gripping tale of magic, adventure and Norse mythology from the SUNDAY TIMES bestselling author of CHOCOLAT and THE GOSPEL OF LOKI.

It’s been five hundred years since the end of the world and society has rebuilt itself anew. The old Norse gods are no longer revered. Their tales have been banned. Magic is outlawed, and a new religion – the Order – has taken its place.

In a remote valley in the north, fourteen-year-old Maddy Smith is shunned for the ruinmark on her hand – a sign associated with the Bad Old Days. But what the villagers don’t know is that Maddy has skills. According to One-Eye, the secretive Outlander who is Maddy’s only real friend, her ruinmark – or runemark, as he calls it – is a sign of Chaos blood, magical powers and gods know what else…

Now, as the Order moves further north, threatening all the Worlds with conquest and Cleansing, Maddy must finally learn the truth to some unanswered questions about herself, her parentage, and her powers.

From the bestselling author of CHOCOLAT and THE GOSPEL OF LOKI comes a fantastical tale of magic, adventure and Norse mythology.”

RUNEMARKS by Joanne M Harris is being re-issued in hardback by Gollancz on 24th November (Amazon bit.ly/RunemarksJoanneMHarris)