Today I’m pleased to welcome Sarah Butler to the blog. Sarah is the author of Before the Fire, published by Picador. Here Sarah talks about More than 100 stories, a collaboration with artist Nicole Mollett mapping and responding to Arts Council England’s Creative People and Places project.

As well as writing novels (Ten Things I’ve Learnt About Love and Before The Fire are both published by Picador), I have what I call a place-specific socially-engaged writing practice. By which I mean I operate as a writer, working in different communities, in different places (writing and place is an obsession of mine and explored more here), finding ways to tell stories, articulate places and think about urban life and urban change.

I don’t want to tell you what it is, or what it will be like. I don’t want to explain, because that might ruin everything. Once I put it into words, it will slip from my grasp – I know that; I have tried before.  I will say: theatre, performance, art, story, moving, beautiful, and on their way from me to you each word will twist and crumble and break apart. So why come? Why risk your time and energy and hard-earned cash? I can only say: trust me, please. I can only say: you’ll love it, it might change your life. They are not the right words. They are nowhere near the right words.

It was a huge privilege and a real challenge to create new writing inspired by these projects, each of which is huge, ambitious and diverse in its own right. Nicole and I visited every project, and collected information online from staff and participants. Early on, we decided that a single piece of work could not hope to portray the complexity and multiplicity of the work that goes on under the CPP banner, so – perhaps foolishly – we called our project More Than 100 Stories! We also decided that our best hope was to think thematically and find connections across projects, and came up with ten themes: confidence, decision-making, failure, language, local, partnership, people, taste, time and trust. 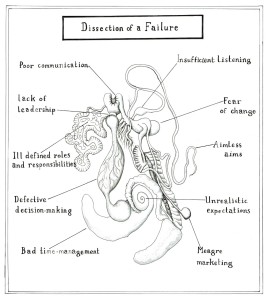 Working with Nicole was a delight – I love the humour and detail of her drawings. We worked together on a number of joint pieces, including a comic strip called How To Catch A Confidence; a make-your-own theatre with starting points to create your own play; an A to Z of Partnership and a piece called Dissection of a Failure.

We each made our own pieces of work too. My favourite of Nicole’s is this one (which now sits on my desk at home reminding me to slow down!):

(click here to view the image)  I also took the opportunity to work with sound artist, Karen Lauke on five sound pieces, an entirely new venture for me. What is Art? brings together voices from across the CPP network giving their own definition of art. Caretaking mixes my own place-specific writing, with location recordings and extracts from a conversation with artist Stephen Turner. Nicole also created a beautiful map detailing all of the CPP projects, which you can explore online. I wrote an accompanying short story called Ever Tried. Ever Failed, which you can read beneath the map.

This was a great commission – we had a pretty open brief, great support from our commissioners and a huge wealth of material and inspiration to draw from. This kind of writing is dramatically different in both process and form, compared to writing my own fiction. I enjoy both, in different ways. Writing a novel can be a long and often quite lonely process. I find that projects such as More Than 100 Stories feed my need for human contact (!), and my desire to understand more about the world by being in it as well as writing about it. They also challenge me – to think about form and language in new ways; to collaborate with artists working in different media. It’s all grist to the mill!

You can find out more about the project here.

“Alice is back in the family house that has never felt like home, waiting out the last few days of her father’s life and yearning to escape. Across the city, a homeless man named Daniel searches for the daughter he has always loved but never met.

Connected by a secret, Alice and Daniel are about to cross paths in unexpected and life-changing ways . . .

Alice has just returned to London from months of travelling abroad. She is late to hear the news that her father is dying, and arrives at the family home only just in time to say goodbye. Daniel hasn’t had a roof over his head for years, but to him the city of London feels like home in a way that no bricks and mortar ever did. He spends every day searching for his daughter; the daughter he has never met. Until now . . . Heart-wrenching and life-affirming, Ten Things I’ve Learnt About Love is a unique story of love lost and found, of rootlessness and homecoming and the power of the ties that bind. It is a story for fathers and daughters everywhere from debut novelist, Sarah Butler.”

“It’s June 2011. Stick and Mac are a couple of months shy of eighteen; summer’s approaching and they’re about to leave their north Manchester estate for the beaches of southern Spain.

But the night before they’re planning to go, Mac ends up in the wrong place at the wrong time, the victim of a random knife attack, and suddenly Stick’s going nowhere.

His mum doesn’t want him to leave the house; his dad’s desperate to be his best friend; and his nan’s boyfriend keeps telling him Mac’s doing just fine in the spirit world.

Then he meets J and she might just be everything he needs. Except she’s a firebrand with a grudge against the police, and the August riots are just around the corner…”