Today I’m pleased to welcome Anna Chilvers to the blog. Anna is the author of Falling Through Clouds and Legging It and her latest novel, Tainted Love, was published by Bluemoose Books on 26 May 2016

Anna answered a few of my questions.

1. Tell us a little about Tainted Love

Tainted Love is set in the town of Hawden where some people are more unusual than others. When Lauren was three months old her mother disappeared and Lauren has been brought up by her dad and Mr Lion. Now Lauren is seventeen and her mother is back in town. Also newly arrived are Richard and his mother Meg, both disturbingly attractive, and Ali, homeless, angry and on the run. When their paths begin to cross, old secrets resurface bringing new tensions.  Lauren discovers that what makes you different is often as not what makes you strong.

2.  What inspired the story?

A number of things came together to inspire Tainted Love. I was listening to a lot of Northern Soul and Motown music around the house and I began to really pay attention to the lyrics. I think all songs have stories behind them, and it can be fun to try and work out what the stories might be. I was washing up and making dinner and characters began to form as I listened to their voices. Some even had their own signature tune (Shy Guy/Peter, I Just Can’t Help Myself/Meg). At first I thought I might write a collection of short stories – The Northern Soul Collection. But the characters started to interact and I realized I had a novel. The playlist is in the back of the book.

I also wanted to write about West Yorkshire, where I live. And I’ve always loved vampires and thought it would be fun to write about them. So all these things came together and became Tainted Love. I love this aspect of novel writing – it’s like cooking or chemistry (both of which I love too) – you bring together disparate elements and the reaction between them makes something new.

3. Tainted Love is set in Yorkshire. Your first novel, Falling Through Clouds was set in Cornwall. How important is geography to your storytelling? What is it about Yorkshire that inspires you?

I think sense of place is very important to me. With Tainted Love one of my intentions from the outset was to write about the West Yorkshire landscape. Places inspire very different feelings, and a book set in the Fens will be very different in tone to one set in the Cairngorms. The setting of my novel is chosen very early in the process and informs the whole of the story. I want to think that the story has to be set in that place – if it was somewhere else it would be a different story.

Last year I received at Arts Council grant to walk the length of the East Coast from St. Abbs in Scotland to Ely in Cambridgeshire (http://www.annachilvers.co.uk/category/east-coast-story-blog/) as research for my next novel.

4. Are you a plan, plan, plan writer or do you sit down and see where the words take you? How long does the process take you from first line to completed novel?

I’m somewhere in between. When I was a kid, one of six, my dad used to take us out in the car and each time we got to a turning we took it in turns to decide which way to go. He called them Mystery Tours. Sometimes we ended up in weird out of the way places – farms, factory yards, woodlands. Sometimes we were back home in no time at all. Writing without planning would be like that, and although it’s fine as an exercise in imagination, I couldn’t write a novel that way. I do see starting a novel as setting off on an adventure, but with a destination, or at least a general direction, in mind. It’s quite possible that destination would change en route, but I need the outline plan to get me going. I know some people plan meticulously so the writing in the end is like colouring in or joining the dots. That’s great if it works for you, but it’s not for me.

I like long distance walking. My ideal life would be writing through the winter and walking all summer. I read voraciously and most of the time I’m not doing something else I have a book in my hand. I find cooking very relaxing, especially if I have lots of time, music and a glass of wine.

That is such a hard question. One?! It would have to be something really long. Contenders include Middlemarch by George Eliot, The Wind-up Bird Chronicle by Haruki Murakami, Cat’s Eye by Margaret Atwood. But if you really are making me stick to only one book it will have to be The Count of Monte Cristo by Alexander Dumas. It’s got everything. Love, death, murder, revenge, adventure. You name it. It satisfies on every level and keeps you right there on the edge of your seat.

7. I like to end my Q&A’s with the same question so here we go. During all the Q&As and interviews you have done what question have you not been asked that you wish had been asked – and what’s the answer?

The question is, Would you like money to go anywhere in the world on a research trip? And where will you go?

The answer is nearly as hard as the only one book question. But seeing as you’re paying, I think I’ll go and spend some time in the Nilgiri Hills in southern India. My grandad was born there and lived there until he was sixteen. As well as being a fantastic trip, it would be discovering a part of my roots. I might do a yoga retreat while I’m there. 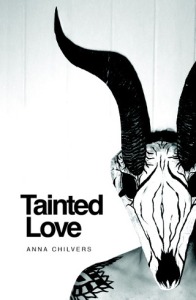 “Secrets and stones have settled in Hawden where everything stays as it is; the past is hidden, or rewritten. Lauren lives with her dad and Mr Lion after her mother left her when she was three months old. Her boyfriend Peter is struggling with his identity. When Meg and her son Richard arrive, both dangerously attractive, and Ali too, angry and on the run from drug dealers, old stories resurface, creating new tensions. After seventeen years Lauren’s mother comes back into her life and nothing is quite what it seems any more, but love, however tainted, can sometimes heal. TAINTED LOVE is a modern gothic tale of how old stories can unravel people’s lives.”