Today I’m pleased to welcome Jenny Blackhurst to the blog. Jenny is the author of the number 1 ebook seller How I Lost You and her latest novel, Before I Let You In was published by Headline in ebook format on 28 August 2016 and is available in paperback on 3 November 2016.

Today Jenny talks about the inspiration behind her latest novel.

The inspiration behind Before I Let You In.

As always, the idea for Before I Let You In came whilst I was walking. There was a time (before he learned to talk) that walks with the baby were peaceful affairs, and my mind would wander all over the place. I’ve lost count of the amount of people who have text me to ask what I was scribbling in a notebook on Featherbed lane.

My ideas always start with a ‘What If?’ My ‘What If’ for How I Lost You was ‘what if everyone told you you’d done something bad and you couldn’t remember?’ For Before I Let You In I knew I wanted to write about a woman who appeared to the outside world to be completely in control of her life – but what if something caused it all to unravel? Control was key for Karen Browning, she had to be seen to be flawless in every sense and couldn’t bear for her friends to see even a little imperfection. But we all know that perfection doesn’t exist and as we get to know Karen a bit better the cracks in her mask begin to show.

Social media was a huge influence in the idea of the façade of perfection within this story. We all know that person who posts constantly about their wonderful life and their perfect family, managing their lucrative career whilst creating Pinterest worthy macrobiotic lunches. Very often it all turns out to be a clever sleight of hand – these people may be swans on the surface but underneath their legs are peddling as fast as everyone else’s. That’s why it’s so refreshing when we catch celebrities without make-up or when we discover that you can be as beautiful and successful as Angelina Jolie but it doesn’t necessarily equate happiness. We love to watch the mask slip.

The title Before I Let You In was originally Before You Let Me In (the POV was first person in the first draft so this made much more sense at the time). I was at a family party when the DJ played the song The Snake by Al Wilson. The minute I heard the lyrics I knew it perfectly embodied my story – the song tells of a woman who takes in a poisonous snake she finds lying freezing in the road and nurses it back to health with honey and milk. When the snake is all better he bites her and as she lies dying she asks him why. The snakes simply replies ‘you knew damn well I was a snake before you bought me in.’

But what if the woman hadn’t known who she was letting in? What if, like Karen, she believed that she was the one who was responsible for helping people, fixing people, never realising that some people couldn’t be (or didn’t want to  be) fixed? I scribbled the words BEFORE YOU LET ME IN on a grubby napkin in eye-liner, shoved it into my purse and my title was born. So the moral of my story is to  watch who you let in, you never know who will turn out to be a snake…

Jenny Blackhurst grew up in Shropshire where she still lives with her husband and children. Growing up she spent hours reading and talking about crime novels – writing her own seemed like natural progression. Inspired by the emotions she felt around her own son’s birth, How I Lost You is Jenny’s thrilling debut crime novel. 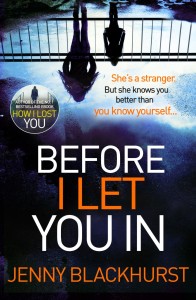 “BEFORE I LET YOU IN is the brand new novel from Jenny Blackhurst, the #1 Kindle bestselling author of HOW I LOST YOU, which Clare Mackintosh called ‘utterly gripping’. If you don’t know who is walking through the door, how do you know if you should let them in? Perfect for fans of Louise Jensen’s THE SISTER and Tracy Buchanan’s NO TURNING BACK, Linda Green and B. A. Paris.

Karen is meant to be the one who fixes problems.

It’s her job, as a psychiatrist – and it’s always been her role as a friend.

But Jessica is different. She should be the patient, the one that Karen helps.

But she knows things about Karen. Her friends, her personal life. Things no patient should know.

And Karen is starting to wonder if she should have let her in . . .”