Today I’m pleased to welcome Ragnar Jonasson to the blog. Ragnar is the author of the Dark Iceland series and his latest novel, Blackout, was published by Orenda Books on 15 July 2016.

Ragnar kindly answered some of my questions.

1. Tell us a little about Blackout

Blackout is set around the famous volcanic eruption in Iceland in 2011, although after the volcano has ceased. The setting is Reykjavik, where a dark ash cloud is hanging over the city, the small town of Siglufjordur, where Ari Thor Arason is still getting used to life away from Reykjavik, and Landeyjar, an area in south Iceland, where some of the most active volanoes are located. It’s actually also set in Nepal, a wonderful country which I visited a few years ago, and some of the scenes (nothing to do with the crime though!) described there are scenes from the life in Nepal and Kathmandu, which I remember from my trip (and in one case, a photo I took actually depicts the exact scene that the character witnesses).
2. What inspired the book and the Dark Iceland series?
Siglufjordur is the area where my grandparents lived (my father’s parents) and Landeyjar is the area where my other grandparents came from, so in a way it’s a personal book, although the plot is completely fabricated. There is however one scene there, where a diary is thrown away, which has some basis in truth: When I was young a small closed chest was found in Siglufjordur, and the owner had passed away, so no-one opened it and it was thrown away – I remember watching horrified, that no-one would ever know what was inside!
Generally speaking though, the idea behind the book was to depict the Icelandic summer, which is a very bright time of year, in a bit more darkness. The ash cloud was real, it was a very memorable day in Reykjavik, and then we have a character locked away, in almost complete darkness, in the middle of summer.
3. Are you a plan, plan, plan writer or do you sit down and see where the words take you? How long does the process take you from first line to completed novel?
Before I sit down, the structure of the book is more or less ready; the story I want to tell, the main characters, the plot and the twists, and of course the ending. Having said that, the characters tend to take a life of their own sometimes and do unexpected things. In Iceland, I have written one book each year since 2009, so the process is in essence about a year, or probably more, because when a new book is being edited and prepared for printing, I have usually started writing the next one, so the time periods overlap.
4. As well as writing your own novels you also translated Agatha Christie novels into Icelandic. Do you have to utilise different skills when working as a translator? What do you think the enduring appeal of Christie is and why do her books translate so well across different languages and cultures?
It’s somewhat different yes, because when translating you don’t have an empty page (or screen) in front of you, the material is already there, but the challenge is still (as when writing) to put it into words in the best possible way. Christie’s strengths were of course her marvellous stories and plots, but also the way she created very memorable settings. For the most clever of Christie’s stories, one can usually summarize the plot twist into one sentence, and yet the twist came as a complete surprise when reading the book.
5. What do you do when you aren’t writing? What do you do to relax and get away from it all?
I work as a lawyer, in Reykjavik and London, and this is certainly very different from writing. I also spend time with my family, of course, and I really enjoy reading, when there is time. I also try to swim quite a lot, in the beautiful Icelandic outdoor thermal pools.
6. If you could only read one book for the rest of your life which book would it be?
That’s a difficult one! I’m usually reading around 20 books at a time, so choosing one is impossible. Could I pick this one? http://www.guinnessworldrecords.com/world-records/thickest-book-published/
7. I like to end my Q&A’s with the same question so here we go. During all the Q&As and interviews you’ve done what question have you not been asked that you wish had been asked – and what’s the answer?
What happened to Ari Thor’s father in the series, when he disappeared?

I won’t give away the answer just yet. 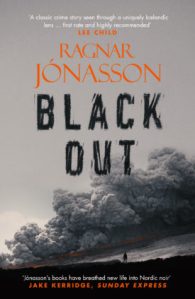 “On the shores of a tranquil fjord in Northern Iceland, a man is brutally beaten to death on a bright summer’s night. As the 24-hour light of the arctic summer is transformed into darkness by an ash cloud from a recent volcanic eruption, a young reporter leaves Reykajvik to investigate on her own, unaware that an innocent person’s life hangs in the balance.

Ari Thór Arason and his colleagues on the tiny police force in Siglufjörður struggle with an increasingly perplexing case, while their own serious personal problems push them to the limit. What secrets does the dead man harbour, and what is the young reporter hiding? As silent, unspoken horrors from the past threaten them all, and the darkness deepens, it’s a race against time to find the killer before someone else dies…

Dark, terrifying and complex, Blackout is an exceptional, atmospheric thriller from one of Iceland’s finest crime writers.”