Today I’m pleased to welcome P.I. Paris to the blog, who’s novel Casting Off, published by Black and White Press on 7 September 2016

Today he talks about adapting his stage play, Casting Off to become a novel.

From stage to page

I began work on what was to turn out to be my debut stage play at the beginning of 2015, having got the idea from newspaper articles at the time highlighting the problems caused by spiralling care home fees.

I decided to set the drama in the Highlands, to make it a comedy and, for practical reasons, limit the characters to three – innocent Dorothy, prim Miss Ross and worldly-wise Joan. Because they were often knitting and this pastime became an integral part of the storyline, the title seemed obvious … Casting Off.

For Dorothy to remain in the home the friends have to devise a way to raise money and, in desperation, they set up a sex line for men who want to speak to mature women in a particular way. The ‘scene was set’ for a fare amount of conflict, confusion and humour.

The 70-minute play toured in the Highlands that autumn and the response took everyone involved completely by surprise. I had no reputation whatsoever as a playwright, so something else was capturing people’s imagination. The first night was sold out a week beforehand and on the evening there was such a queue without tickets that I’m ashamed to say I didn’t have the nerve to venture outside!

Even with this response, as far as I was concerned the ‘project’ would end with the tour. I was also the producer and Casting Off had dominated the previous six months. It had been a tremendous experience, but there was still a day job to be done.

Fate had other ideas. In an email, which I almost didn’t send, I mentioned the play to the managing director of Black & White Publishers in Edinburgh (publishers of my books about the Italian chapel in Orkney). He replied, wishing me all the best with the production and suggested that the storyline would make good novel. I hadn’t considered such a possibility, but knew immediately that this was what I had to do.

A few years ago I had written a 45-minute radio drama about a care home, which didn’t get anywhere other than my desk drawer. However, it provided a very neat subplot, along with several ready-made characters. So I had a 10,000 word script and one of 7,500. My target for the novel was 75,000 words and obviously quite a bit of each drama had to be ignored because the action simply didn’t translate.

Having taken a few weeks break after the tour, I began writing the novel during November. The book required a lot more research and I interviewed a range of people … carers, managers, district nurses, a minister, a GP and even the hairdresser. Although Casting Off is a work of fiction I wanted to ensure that, as far as possible, there wasn’t anything that was actually inaccurate.

I’ve never worked in such a concentrated way and had written a draft within four months (I never say ‘first draft’ as I rewrite constantly along the way). I then spent a couple of months revising the whole manuscript before sending it to Black & White Publishing in April, in order to meet the deadline set in the contract I had signed earlier in the year.

Since then everything has gone extremely smoothly. The paperback and ebook were published in September and I’m involved in a series of book launches during October, all of which fall under the umbrella of Luminate – Scotland’s creative ageing festival. My first talk/signing is at Waterstones in Inverness on Saturday 1st October … one year and a day since the first performance of the play. 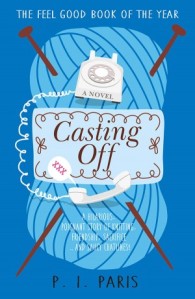 “When the residents of a Highland care home discover that the new owners are about to substantially put up the fees, they know that dramatic action is called for. But what can a group of senior citizens possibly do against a big organisation? For Dorothy, the situation is serious. If she can’t raise money she’ll have to leave all her friends, like dear Miss Ross.

In protest, the residents barricade themselves into the lounge. However, their rebellion fails, so worldly-wise Joan suggests a most unusual way to cover the rise – a very naughty chat line for men who want to talk to older women ‘in a particular way’! As their lives take a series of unexpected turns, things get increasingly out of control …

Casting Off is a hilarious, poignant tale of friendship, loyalty and sacrifice – and how it’s never too late to try something new.”