The first suggestion this week comes from Dan Micklethwaite. Dan is the author of The Less Than Perfect Legend of Donna Creosote, published by Bluemoose Books and which was recently shortlisted for the Guardian’s Not the Booker prize. Dan’s suggestion is The Minotaur Takes a Cigarette Break by Steven Sherrill, published by Canongate. 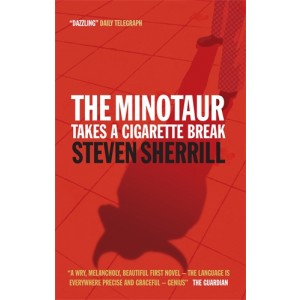 Five thousand years on – and the Minotaur, or M as he is known to his colleagues, is working as a line chef at Grub’s Rib in Carolina, keeping to himself, keeping his horns down, trying in vain to put his past behind him. He leads an ordered lifestyle in a shabby trailer park where he tinkers with cars, writes and re-writes to-do lists and observes the haphazard goings on around him. Outwardly controlled, M tries to hide his emotional turmoil as he is transported deeper into the human world of deceit, confusion and need.

Here’s what he has to say:

“I’d like to suggest The Minotaur Takes a Cigarette Break, by Steven Sherrill. I understand it got quite a bit of notice in America upon its release, but seems to have gone under the radar in the UK, and I so rarely run into anyone else who’s read it – unless I’ve already lent it to them! It’s about the Minotaur of ancient Greek myth, and how he’s ended up after all the long centuries working as a fry-cook in the American mid-west. The way Sherrill writes him, the character becomes one of the most unique and poignant studies of an outsider I’ve ever come across, and the people he interacts with are so superbly and deftly drawn, as well, that I find myself returning to it again and again. A gem of a novel, well-deserving of a wider audience.”

“Charting loss, love, and the difficult art of growing up, these stories unfurl with wicked humour and insight. Two young boys make midnight trips to a boat graveyard in search of their dead sister, who set sail in the exoskeleton of a giant crab; a boy whose dreams foretell implacable tragedies is sent to ‘Sleepaway Camp for Disordered Dreamers’ (Cabin 1, Narcoleptics; Cabin 2, Insomniacs; Cabin 3, Somnambulists. . . ); a Minotaur leads his family on the trail out West, and finally, in the collection’s poignant and hilarious title story, fifteen girls raised by wolves are painstakingly re-civilised by nuns.”
Read more on the Penguin website.

Here’s what Anna had to say about her choice:

“I really love the work of American writer Karen Russell, and I would like to recommend her book of short stories, St Lucy’s Home for Girls Raised by Wolves. Her blend of the real and the imaginary worlds appeals to me and also inspires me. And I must confess that one of the stories in this –  from Children’s Reminiscences of the Western Migration  – was part of the inspiration for Tainted Love.”

So there we have it, two books that I admit I’ve never come across and which sound completely different to each other. Have you read either of this week’s suggestions? Let me know what you make of the books highlighted this week. And do let me know your quiet read,