Today I’m pleased to welcome Kathryn Hughes to the blog. Kathryn is the author of The Letter and her latest novel, The Secret, was published by Headline on 8 September 2016.

Today Kathryn talks about the delights, or lack thereof, of the food of the Seventies.

THE SEVENTIES – A GASTRONOMIC WASTELAND

How spoilt we were in the seventies! Angel Delight (Butterscotch was my favourite), Raspberry Instant Whip (move along, no raspberries to see here, folks) Dream Topping, tinned peaches with Carnation milk, and if you fancied something more exotic, who didn’t love a Vesta boil in the bag curry? It only took off a couple of layers of skin as you sliced open the bag and the steam gushed out, giving you an instant facial.

I’m sure I must have eaten fresh fruit and vegetables back then, but why go to the trouble of peeling a spud when you can just pour boiling water onto dehydrated lumps of potato then fluff it all up with a fork?  If you said you’d had your ‘five a day’ back in the seventies, you were referring to fags not fruit.

My favourite meal growing up was Sunday Tea.  Having already had our Sunday dinner in the middle of the day, this was a light meal eaten in the evening in front of the television. We would gather in the lounge and push the furniture back as Mum wheeled in the two-tiered tea trolley.  We used to laugh at my nana when she referred to this seventies must-have as the ‘dinner wagon.’  On the top tier would be the fish paste sandwiches, always on thick white bread, crusts as well.  On the bottom tier was the Battenberg and the pot of tea. We never had tea bags in our house, always tea leaves, but we didn’t have a tea strainer so unless we forgot to leave the bottom inch of our cuppa, we ended up spluttering the dregs back into our mugs. The ancient tea pot was covered up with what must surely be a uniquely British phenomenon, the knitted tea cosy.  These were always home-made, in thick brightly coloured wool, usually in hideously clashing colours and always with a pom-pom on top.  Quite what the purpose of the pom-pom was I have yet to discover.

School dinners were compulsory at my primary school – bringing a packed lunch was unheard of.  After our little bottle of warm milk at first playtime, we would then file into the dinner hall for lunch. They weren’t too bad on reflection but sometimes I would get behind the boy in the queue who only ate the skin off the custard.  The dinner ladies would scrape it off and pile it all into a bowl just for him. It used to make me heave. At the end of ‘second-sitting’, all the left-over food was emptied into the pig-swill, two huge vats in the playground that would incubate the scraps until the farmer came to collect it at the end of the week.  We would dare each other to lift the lid and smell the contents.  Even now it makes me feel sick. Those were the days! 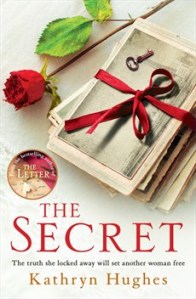 “Mary has been nursing a secret.

Forty years ago, she made a choice that would change her world for ever, and alter the path of someone she holds dear.

Beth is searching for answers. She has never known the truth about her parentage, but finding out could be the lifeline her sick child so desperately needs. When Beth finds a faded newspaper cutting amongst her mother’s things, she realises the key to her son’s future lies in her own past. She must go back to where it all began to unlock…The Secret.”