Today I’m pleased to welcome Tracey Sinclair to the blog. Tracey is the author of The Bridesmaids Blues and the Cassandra Bick series. The latest Cassandra Bick story, Angel Falls was published on 13 January 2016.

Tracey has written a piece about writing novels longhand.

The pleasures and the perils of writing longhand

Who doesn’t love a notebook? In a digital age, there’s still something lovely about paper you can hold in your hand, about being able to set your thoughts down on the page, in all their messy, scrawling glory. I’ve nurtured a stationery obsession since I was a child and, judging from my groaning shelves, it’s not going anywhere. But as a writer, it’s both a rewarding and precarious romance.

I write a wide range of things, for a lot of different publications, and so my writing style tends to adapt to each new task. Shorter non-fiction pieces are almost always just typed straight into my laptop for ease and efficiency, though I occasionally take prep notes, and sometimes when I am doing theatre reviews take a smaller notepad with me as an aide memoire (though this is usually pointless – my handwriting isn’t good at the best of times, and in the dark, trying to make notes on my lap and usually with a glass of wine or two inside me, it descends into indecipherable scrawl. Many is the times I’ve thought I’ve penned an incisive review in longhand only to check my notes the next day and find I’ve written something that looks like ‘why blue pigeon? Apples!’ and some random hieroglyphics!).

For my novels, I start by making scene and character notes. At this stage, I’m not fussy about what I use – I have a massive collection of notebooks, bought as keepsakes from my travels, or because they were pretty, or, often, given as gifts (my friends know notebooks are ‘my thing’). I usually amass a motley pile of various sizes by the time I’m ready to move to a first draft – and that’s when I get picky. I have found, through trial and error, what works best for me: it has to be lined, can’t be smaller than A5 (my thoughts need space to spread out), but it doesn’t have to be expensive: while I do love a Moleskine, I’m also partial to Muji and my current favourites are metallic covered exercise books from Paperchase, a bargain at 3 quid a pop (I love them so much that when I thought they were being discontinued, I went out and bought 20!)

Writing longhand like this helps the story breathe. It prevents lazy short cuts and encourages rewriting and self-editing – I can’t simply decide it’s good enough, since even if it’s perfect, I still have to type it up. There’s a saying ‘ink thinks’ and I believe it – there’s a fluidity and flow to my writing when I do my first (and sometimes second) draft longhand. It’s not a strategy without risks, since I’m writing without back-ups – I once abandoned an entire novel when the first draft was taken in a handbag that got stolen, and I lost a full month’s work when I spilled water on my bedside table, reducing a carefully crafted story to so much blurred and crumpled paper. But for me, the pleasures of longhand are worth the perils. Besides, it gives me an excuse to keep buying notebooks… 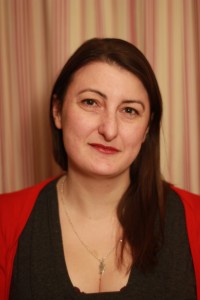 Tracey Sinclair is an author and freelance editor and writer. Her books include the romcom The Bridesmaid Blues and the Dark Dates/Cassandra Bick series, the latest of which, Angel Falls, is out now. http://www.darkdates.org 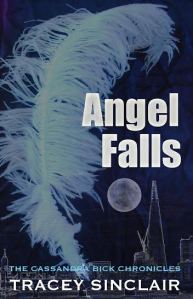 “It isn’t easy to surprise Cassandra Bick. When you run a human-vampire dating agency, your colleague is a witch who is engaged to a shifter and your business partner is one of London’s most powerful (and sexiest) vampires, there’s no such thing as a normal day at the office.

But when a mysterious Dark Dates client brings a dire warning of a new threat to the city’s supernatural community, Cass and her friends realise they are up against their deadliest foe yet – and that this time, the danger is far closer to home than they could ever have imagined.

Sexy, snarky and with more bite than a crypt full of vampires, Angel Falls is the latest in the Dark Dates: Cassandra Bick series.”