Today I’m pleased to welcome Jon Teckman to the blog. Jon is the author of Ordinary Joe which was published by Borough Press on 16 July 2015.

Jon kindly answered a few of my questions.

1. Tell us a little about Ordinary Joe.

Ordinary Joe is the story of a perfectly normal, happily married, always-do-the-right-thing, kind of a guy who wakes up one morning in bed with a top Hollywood actress – and finds his entire, comfortable, ordinary way of life threatened.  There is a brief moment when he could possibly tell the truth and take the consequences – but that would make it a very short (and not very interesting) book!  So, instead, he tries to lie his way out of trouble and gets himself, and others, into deeper and deeper hot water.  Will he get away with it? Does he deserve to get away with it? You’ll have to read it to find out!

The main character (Joe West) works on the fringes of the film industry helping to finance Hollywood movies.  I used to have a similar peripheral position in the business, first as a civil servant advising Ministers on film policy and then as Choef Executive of the British Film Institute.  These roles brought me into contact with all sorts of household names and superstars, and certain incidents in the novel are based on things that actually happened to me (though not, I hasten to add in case my wife is reading this, Joe’s infidelity with the beautiful Olivia Finch!) I actually first started to jot down some ideas for a story about an Englishman slightly out of his depth in Hollywood on a flight home from Los Angeles way back in the year 2000, but it wasn’t until some years later that I actually sat down to start writing Ordinary Joe.

I wouldn’t describe myself as a planner but, for Ordinary Joe, I did write quite a long outline of the whole story (which I then veered from quite significantly as I got down to creating the first draft).  I prefer to set off with a group of characters and an interesting situation and see where it will take me – although this does mean that you end up writing yourself into a lot of dark alleys.  It took me just over a year to complete my first draft of Ordinary Joe but another six years – and 20 plus drafts – before it was accepted by The Borough Press and then a further year (and two more drafts) before the final, published version was ready.

4. What did you discover about the process of creating a novel that surprised you?

This is a bit of a standard author’s trope, but I do think that one of the most surprising and enjoyable aspects of creating a novel is when your characters do or say something that you weren’t expecting.  This might sound daft as surely the author should be in control of what they are writing, but every so often something somehow jumps from your brain to your fingers without any conscious intervention between the two. There is one line in Ordinary

Joe that still makes me laugh despite countless re-readings just because it was totally unplanned and emerged from one of the characters as if by magic. It’s a bit like improv or adlibbing in the theatre, I suppose.

Sadly, my writing doesn’t yet pay for an ocean-going yacht (or even cover all the household bills) so I still have to work.  I am a freelance trainer specialising in leadership and team development and currently work two or three days a week which gives me time to write and spend plenty of time with my wife and two sons.  I used to be a very keen cricketer but gave that up a few years ago when I found that either the bowling was getting faster or I was getting slower (probably the latter).  Writing can be very sedentary so it is important to do something active to keep the pressure sores at bay.  One of my favourite activities at the moment is doing military style bootcamp training with a company called Regiment Fitness through which, in addition to the intrinsic pain and discomfort of tough physical exercise, one can also enjoy being shouted at by an ex-military PT instructor!

Catch-22 by Joseph Heller. Every single sentence is crafted with a precise beginning, middle and end – and then juggled about to create some extraordinary literary effects. Every time I read it I find something new that I hadn’t picked up on before – and marvel at Heller’s skill. I’ve read all of his novels and some of the others are really good, but he never wrote anything that quite matched up to his stunning debut.  Then again, as Heller himself once remarked, neither has anybody else!

Was it worth it? Was finally seeing Ordinary Joe in print worth all the hours of hard graft and the pain of repeated rejections and disappointments along the way?

To which the answer is: Emphatically YES!

Jon Teckman was born in Northampton in 1963. He served as an advisor on film policy to both Conservative and Labour governments before becoming Chief Executive of the British Film Institute in 1999. He now lives in Aylesbury, Buckinghamshire with his wife Anne and sons Joseph and Matthew. Ordinary Joe is his first novel. 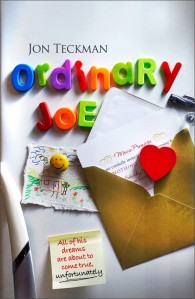 “What would you do if…

…you were happily married

Joe West, accountant, father and husband is just your average guy who has just walked into that dream scenario. Except the dream sours fast and suddenly everything he holds dear is on the line.

Sometimes life is crazier than the movies.”