The first book to be suggested is The Golden Cup by Marcia Willett, published by and was suggested by Sue Featherstone. Sue is the co author of A Falling Friend with Susan Pape, which was published by Lakewater Press on 25 April 2016. 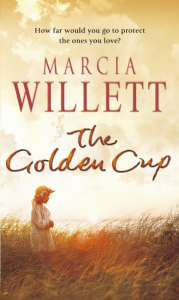 “Paradise has been home to generations of Trevannions: Paradise, the house at the head of a sheltered Cornish valley where Mrs Trevannion lives, surrounded by her family. Frail and elderly Honor Trevannion, bedridden following a nasty fall, is inexplicably anxious and distressed by the arrival of a young American bearing an old black and white photograph of a double wedding and looking for a long-lost relation.

Her children Bruno and Emma, granddaughter Joss and faithful cousin Mousie try to nurse Honor back to health, unaware of the secrets which she keeps from those closest to her. Increasingly troubled and confused, she begs Joss to find a cache of letters which have been hidden for fifty years.

Too late to hear the story from Honor herself, the family are faced with revelations which could destroy the tranquillity of life in their beloved valley. Will they be torn apart or can they unite in admiration for one woman’s courage in standing by the life-changing decision she made so many years ago?”
Read more on the Penguin website.

This is what Susan had to say about The Golden Cup:

“The Golden Cup is a heart-warming, but not soppy, exploration of the consequences of a single, well-intentioned lie.  Author Marica Willett, (Birdcage and The Children’s Hour) explores Honor’s predicament without bias….Willet is a cracking storyteller and I devoured The Golden Cup in a single afternoon.”

You can read Susan’s full opinion on The Golden Cup on her website, Pink Bicycle Books

The next suggestion this week is from Bettina at Tripfiction. This time she has chosen The Guest Cat by Takashi Hirdaide, translated by Eric Selland and published by Picador. 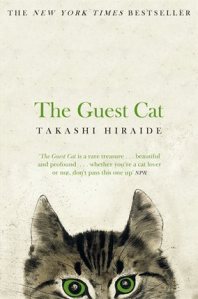 “A couple in their thirties live in a small rented cottage in a quiet part of Tokyo. They work at home as freelance writers. They no longer have very much to say to one another.

One day a cat invites itself into their small kitchen. She is a beautiful creature. She leaves, but the next day comes again, and then again and again. New, small joys accompany the cat; the days have more light and colour. Life suddenly seems to have more promise for the husband and wife; they go walking together, talk and share stories of the cat and its little ways, play in the nearby Garden. But then something happens that will change everything again.

The Guest Cat is an exceptionally moving and beautiful novel about the nature of life and the way it feels to live it. The book won Japan’s Kiyama Shohei Literary Award, and was a bestseller in France and America. – See more at: http://www.picador.com/books/the-guest-cat#sthash.eVOB31BN.dpuf&#8221”

Here’s what Bettina had to say:

“The novella is a low key read, by which I mean you can read, and walk into the story, the pace is slow and ruminative…It is written in a precise language, no extra words, it is genuinely beautifully crafted. Is this a story about a cat? In part, but it is also a snapshot of life and space in late 20th century Tokyo, about a marriage, about people interacting and paths crossing.”

You can read my review of The Guest Cat here.