The first choice this week is from Bettina at Tripfiction. Bettina has lots of fantastic sounding books to recommend and so you’ll see her featured a few times in these posts 🙂

This week’s suggested title is A House Called Askival by Merryn Glover, published by Freight Books.

‘An elegant, moving and heartfelt love letter to the sights, sounds and tastes of northern India told through the enthralling story of the troubled relationship between a father and daughter stretching from Partition to the present day.

James Connor is a man who, burdened with guilt following a tragic event in his youth, has dedicated his life to serving India. Ruth Connor is his estranged daughter who, as a teenager, always knew she came second to her parents’ missionary vocation and rebelled, with equally tragic consequences.

After 24 years away, Ruth finally returns to Askival, the family home in Mussoorie, a remote hill station in the Northern State of Uttarakhand, to tend to her dying father. There she must face the past and confront her own burden of guilt if she is to cross the chasm that has grown between them.

In this extraordinary and assured debut, Merryn Glover draws on her own upbringing as a child of missionary parents in India to create this sensitive, complex, moving and epic journey through the sights, sounds and often violent history of India from Partition to the present day.’

Here’s what Bettina had to say:

“The stories intertwine well and history is blended into the narrative to add to the overall understanding – what Partition meant for millions of people and how the conflict between religions flared up and caused so much strife between peoples. And it is a story about family, about rejection and loyalty and so much more.”

You can read the full review on the Tripfiction website here. If that doesn’t tempt you may like to know that The House of Askival has 63 five star reviews on Amazon.

The second suggestion is from another blogger who has a fantastic list of books she thinks we should read. Caryl who blogs as Mrs Blogs, The Average Reader. Caryl has suggested The Drumbeater by Clive Allan, which is published by Matador. 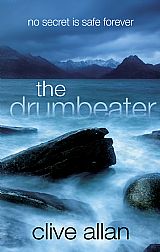 ‘When skeletal remains are found buried on a beach near the remote Scottish village of Glendaig, the evidence points to murder, to a crime dating back seventy years to World War Two. The task of unravelling the mystery falls to history graduate Neil Strachan, now a career cop, fast tracked into a new role on Northern Scotlands Major Enquiry Unit. When Neil calls upon German naval historian, Matthias Fuchs, to help identify the remains, a name soon emerges, that of a dashing young U-boat ace who mysteriously disappeared in 1941: Korvettenkapitän Max Friedmann.

Neil seeks the assistance of Glendaig’s elderly residents, but encounters an impenetrable wall of silence, causing him to suspect that they know far more about the young submariner than they are willing to impart. With more questions than answers, and under mounting pressure from his cynical boss to wrap up the enquiry, Neil embarks on a race against time to discover the truth. He begins to unravel a tale of subterfuge, escape and astounding loyalty. A tale that will ultimately reveal a secret that could have changed the course of World War Two…’

This is what she had to say:

“What a thoroughly absorbing and interesting read this was….There are several twists and turns that leave the reader wondering who exactly the culprit or culprits were…A remarkable debut novel and I really hope there will be a whole series to read.”

You can read the full review here. If that’s not enough The Drumbeater has 39 5 star reviews on Amazon.

So there you have it, two new ideas for the TBR. Have you discovered any hidden treats that you feel should be read more widely?