Today I’m pleased to welcome Jane Corry to the blog. Jane’s debut novel My Husband’s Wife was published in ebook by Penguin on 26 May 2016 and is published in paperback on 25 August 2016.

Jane kindly answered a few of my questions.

TELL US A LITTLE ABOUT ‘MY HUSBAND’S WIFE’

It explores the relationship between a first and second wife; a criminal; and a child. There are lots of twists. No one is quite whom they seem!

WHAT INSPIRED THE BOOK?

A mixture of prison and marriage! I worked for three years as the writer in residence of a male high-security prison. It was a world I had never been in before. And it opened up my eyes! This coincided with the end of my twenty seven year old marriage. Three years later, I married again. I get on well with my first husband’s wife. But it made me wonder what might happen if one needed a favour from the other…

CAN YOU DESCRIBE THE PROCESS OF CREATING A NOVEL?

I start with the kernel of an idea. Then I think about three or four  characters who would work well in it. I give each one a problem or challenge. I start with the first and see where it takes me. I like to write in two viewpoints because it’s a way of reflecting other characters’ personalities and it also moves the plot along. I make sure there is a cliff-hanger at the end of each chapter. I ‘layer’ problems so that when one is solved, there is another. I take about four months to write the first draft; every day, I do about 2,500 words. Then I revise it at least four times to make sure the plot hangs together and the characters are as deep as possible. I use photographs from magazines to picture my cast and I read my work out loud. I live in a world of my own when writing. Then it goes to my editor.

WHAT DO YOU DO WHEN YOU AREN’T WRITING?

I run every morning with my dog; swim in the sea (in a wet suit); play tennis; do yoga; organise writing groups; walk miles every day; am on a committee to help the  homeless; co- judge the life story section of the Koestler Awards (for men and women in prison and mental institutions); and try to be there for my family.

IF YOU COULD ONLY READ ONE BOOK FOR THE REST OF YOUR LIFE, WHICH BOOK WOULD IT BE?

Love this question! It’s by the side of my bed right now and I read a bit every day. It’s called ‘Daily Strength For Daily Needs’, selected by Mary. W. Tileston and was first published by Methuen in 1904. It was amongst my mother’s belongings when she died in her fifties from ovarian cancer. There are three readings for every day to provide inspiration. Some are religious but many are ‘just’ wise sayings. One of my favourite is about how to cheer yourself up. The answer: do something for others. My mother wrote all the family birthdays on the relevant days. I’ve added precious photographs and postcards inside.

DURING THE Q AND A’S THAT YOU’VE DONE, WHAT QUESTION HAVE YOU NOT BEEN ASKED – AND WHAT’S THE ANSWER?

It’s a question I always ask myself about my characters before I start a scene. What have you just been doing? It could be something simple like peeling an orange. Or it might be committing a crime. Just before I sat down to write this, I was talking to a friend with whom I’d lost touch  over thirty years ago. We ‘found’ each other through a chance remark made by dear friends – who turned out to have been neighbours of my long-lost friend hundreds of miles away. If I put that in a novel, you might think it was too much of a coincidence. But it’s true! 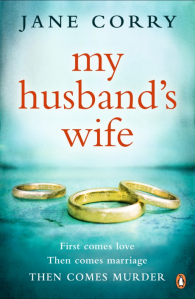 “When lawyer Lily marries Ed, she’s determined to make a fresh start. To leave the secrets of the past behind.

But then she meets Joe. A convicted murderer who reminds Lily of someone she once knew, and who she becomes obsessed with freeing.

But is he really innocent?

And who is she to judge?”
Read more at on the Penguin website.