I’m part of a wonderful online community called Book Connectors where bloggers, reviewers and authors can discuss all things book related. During one of the threads there was mention of ‘quiet’ books, the ones that miss out on the big publicity push. It was agreed that it was such a shame that certain books weren’t as widely read, as the reading public were missing out on hidden gems. So that sparked a germ of an idea and I decided to do a series of posts highlight titles that myself and other bloggers and authors feel may have gone under the reader’s radar. (That’s was the working title for this series of posts and as inspiration hasn’t struck me with anything better, its the one I’m going with for now).

Today’s first choice is by Anne Williams who blogs at Being Anne. She recommends Not Forgetting the Whale by John Ironmonger, published by W&N. 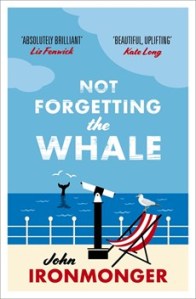 “If you were looking for the perfect escape, where would you go? This is the heartwarming story of one man who has given up hope and the village that gives it back to him.

When a young man washes up, naked, on the sands of St Piran in Cornwall, he is quickly rescued by the villagers. From the retired village doctor and the beachcomber, to the priest’s flirtatious wife and the romantic novelist, they take this lost soul into their midst. But what the villagers don’t know is that Joe Haak is a city analyst who has fled London, fearing he may – inadvertently – have caused a global financial collapse.

But is the end of the world really nigh? And what of the whale that lurks in the bay? Intimate, funny and heart-warming, Not Forgetting the Whale is a story about community, the best and worst in our nature, and the search for a place to call home.”

Here’s what she has to say about it.

“this is one of those rare books that I’ll be thrusting into the hands of friends and urging them to read it, it’s so thoroughly perfect…I found it a fascinating exploration of how a very specific community of people react to a global event, and how people’s resilience and capacity for love will always surprise you“

Not Forgetting the Whale has nearly 60 reviews, none less than three stars and has 40 five star reviews.

The next suggestion is from Bettina at Trip Fiction. Her recommended read is The Bamboo Stalk by Saud Alsanousi and translated by Jonathan Wright, published by Bloomsbury Qatar Foundation Publishing.

“Josephine escapes poverty by coming to Kuwait from the Philippines to work as a maid, where she meets Rashid, an idealistic only son with literary aspirations. Josephine, with all the wide-eyed naivety of youth, believes she has found true love. But when she becomes pregnant, and with the rumble of war growing ever louder, Rashid bows to family and social pressure, and sends her back home with her baby son, José.

Brought up struggling with his dual identity, José clings to the hope of returning to his father’s country when he is eighteen. He is ill-prepared to plunge headfirst into a world where the fear of tyrants and dictators is nothing compared to the fear of ‘what will people say’. And with a Filipino face, a Kuwaiti passport, an Arab surname and a Christian first name, will his father’s country welcome him?

The Bamboo Stalk takes an unflinching look at the lives of foreign workers in Arab countries and confronts the universal problems of identity, race and religion.” (synopsis and book cover image from Amazon)

Here’s what Bettina had to say.

“This is an incredible story of migration and rootlessness and what it means “to belong”. It is epic in its breadth and story….Alsanousi has a real ability to get into thinking of his chosen countries, the Philippines just comes alive…In Kuwait he captures the oppressive nature of society…”

You can read the full review on the Trip Fiction website.

So there you have it, two more books that I have yet to read but both of which sound fascinating. I hope you’ve discovered a new read, and do let me know if you’ve any books you’d like to share.