Today I’m very pleased to share with you this Q&A with Natasha Solomons. Natasha is the author of Mr Rosenblum’s List, The Gallery of Vanished Husbands and The Novel in the Viola. Her latest novel, The Song Collector, was published in paperback by Sceptre on 24 March 2016. I had a chat with Natasha and she kindly answered some of my questions.

Fox, as the celebrated composer Harry Fox-Talbot is known, wants to be left in peace. His beloved wife has died, he’s unable to write a note of music, and no, he does not want to take up some blasted hobby. Then one day he discovers that his troublesome four-year-old grandson is a piano prodigy. The music returns and Fox is compelled to re-engage with life – and, ultimately, to confront an old family rift.

The inspiration was two fold. Firstly, I wanted to write about grandparents. I’d just had my son and I wanted to explore relationship between my mum and son, to look at intimacy between a grandparent and a grandchild, which I think has been underdone in fiction. Secondly I like to explore different types of creativity, and song collecting fit. Also when I moved house I discovered that a song collector named Benjamin Rose has once lived there during the 18th Century and who had written a manuscript book full of songs he had collected. I was fascinated by his story as I found out more about him.

3. Did you write the novel sequentially or did one aspect of the dual time storyline appear first, and the other written in response

I wrote it weaving in and out. It very much had to feel like one novel. There is the danger with a dual time novel that it will feel like two novellas sliced together and I didn’t want that to be the case. I wanted to ensure that it was not the case that the reader would like one time period of the book and not the other. I wanted to ensure that a question raised in one was answered in the other. So that required some planning, lots of charts and a messy desk.

4. The novel feels like a symphony in written form, there is almost a musical flow to the narrative. I did say that I felt the book should come with a soundtrack! What melodies would you include on any soundtrack?

Oh lots of Vaughn Williams, a little of Elgar and a lot of Delius, those kind of big turn of the century composers. I’d mix this in with folk music and songs from folk singer, musician and song collector, Sam Lee and Tim Laycock. I’ve started a communal project with friends to map as many songs as possible and we’ve created a song map so that people can freely access the music of their town and perhaps learn their own local songs. You can find out more at www.songmap.co.uk.

5. How important do you think it is that old customs and folk songs in particular are retained for future generations? What do folk songs bring to society?

I think they are essential, they are part of who we are even if we don’t realise it. They are a connection of who we are and where we live. The wonderful thing about music is it is a living functional thing. It changes and grows with you. There is an emotionality when you hear music from a certain place.

6. Are you a plan, plan, plan writer or do you sit down and see where the words take you? How long does the process take you from first line to completed novel?

It depends. I do have plan and have weigh points but I need room for surprise. I need a sense of where it is going. I listen to the rhythms of the story but need the space to be surprised by it. I can write quite fast but life gets in the way. On average it takes about a year to write a novel, sometimes can be faster, but edits can take a while. The novel I’m currently working on is going to be huge so will take longer for sure.

Laundry and tidying up after the children mainly! And squeezing in a glass of wine if there’s chance.

8. If you could only read one book for the rest of your life which book would it be?

Jane Austen’s Emma it is the perfect novel in miniature. The whole world is in that novel, there’s drama and romance and never strays outside the small village of Highbury where it is set.

9. I like to end my Q&A’s with the same question so here we go. During all the Q&As and interviews you’ve done what question have you not been asked that you wish had been asked – and what’s the answer?

I found The Song Collector to be a wonderful novel. You can read my review here. 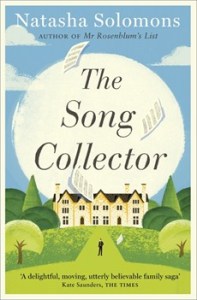 “Fox, as the celebrated composer Harry Fox-Talbot is known, wants to be left in peace. His beloved wife has died, he’s unable to write a note of music, and no, he does not want to take up some blasted hobby.

Then one day he discovers that his troublesome four-year-old grandson is a piano prodigy. The music returns and Fox is compelled to re-engage with life – and, ultimately, to confront an old family rift.

Decades earlier, Fox and his brothers return to Hartgrove Hall after the war, determined to save their once grand home from ruin. But on the last night of 1946, the arrival of beautiful wartime singer Edie Rose tangles the threads of love and duty, which leads to a shattering betrayal.

With poignancy, lyricism and humour, Natasha Solomons tells a captivating tale of passion and music, of roots, ancient songs and nostalgia for the old ways, of the ties that bind us to family and home and the ones we are prepared to sever. Here is the story of a man who discovers joy and creative renewal in the aftermath of grief and learns that it is never too late to seek forgiveness.”