Jorn Lier Horst is one of Norway’s most experienced police investigators, but also one of Scandinavia’s most successful crime writers. He writes engaging and intelligent crime novels that offer an uncommonly detailed and realistic insight into the way serious crimes are investigated, as well as how both police and press work. His literary awards include the Norwegian Booksellers’ Prize, the Riverton Prize (Golden Revolver), the Scandinavian Glass Key and the prestigious Martin Beck Award.

My Friend in Crime

Ordeal is my tenth book about Chief Inspector William Wisting and the fifth to be translated into English. It starts down in a basement in an old, substantial timber villa. The man who had lived there is now dead, and the house has been inherited by single mother Sofie. She has no happy memories from the place, and before she takes it over, ensures is emptied of all contents and personal effects and cleaned so that nothing remains to remind her of the past. The only thing left behind is a bulky old safe fixed to the floor in the basement with internal bolts. It is locked and no one has been able to find the key …

Not until seventy pages into the story does the reader learn what the safe contains. The contents have great significance for a case that William Wisting has been working on for more than six months.

They are detectives, lawyers, journalists, private investigators or even rank amateurs. Many authors have considered it of paramount importance to hit upon a central character as original as possible, who has some kind of illness, bad habit or some other trait that makes them interesting or exceptional. What they have in common is their literary function. They are problem solvers: in the end they return everything to its rightful place, providing us with knowledge and understanding and ensuring justice.

When, almost fifteen years ago, I had in mind to create a new, Scandinavian crime hero, I was very conscious of what he should be like. I was tired of reading about detectives who singlehandedly solved murder cases while dead drunk, waking up in the mornings with three-day-old designer stubble and a whisky bottle at the ready on the bedside table. I wanted a central character who was more like the policemen I knew from my daily work in the police force. It turned out to be William Wisting, a fair-minded, exemplary policeman but above all a decent and genuine human being.

One of the greatest demands resting on the shoulders of a writer of police procedurals is the depiction of the interpersonal. Ordeal and the previous novels, therefore, do not merely deal with how Wisting tackles a case and how he solves it, but also the impact the case has on him. Wisting changes from one book to the next, and even from one chapter to the next.

We who write about serial protagonists have all experienced how readers become concerned about our central character on a purely personal level. In many ways they have stepped out of fiction and into reality. Tourists go on pilgrimages to Baker Street and the Sherlock Holmes museum there, even though they will search in vain for 221B. Maigret has his own statue in George Simenon’s home town of Liège in Belgium. Ystad in Sweden has become a magnet for tourists and you can follow a guided tour of The Killing locations in Copenhagen. I myself have come across German tourists with a street map, trying to find out where William Wisting actually lives. This says something about the serial protagonist’s significance for the reader, as a person as well as a fictional figure. What we find when we delve into a book in which we encounter a character we already know from before, is that this is a safe place to be, this is a place we recognise. The genre also gives us confirmation that we have made another good choice, and this is exactly the type of book we want to read.

To anyone who has not read any of my earlier books, I like to think Ordeal will provide an interesting first meeting with Chief Inspector Wisting. And to those already familiar with him, I hope that the book will be a pleasant reunion with a dear old friend. 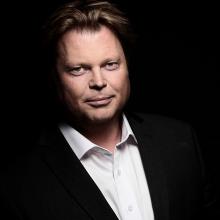 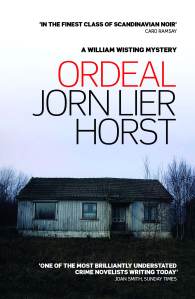 “Together with her one year old daughter Maja, single mother Sofie Lund moves into the house she inherited from her grandfather. Sofie has such painful memories that she has had every trace of the old man removed, every trace but a locked safe that has been bolted to the basement floor. Inside the safe, Sofie finds something shocking that will also become crucial evidence in a case that has plagued Inspector William Wisting for a long time. To follow this lead though, he must cut across important loyalties and undermine confidence in the police force.”

Ordeal was published on 17 March 2016 by Sandstone Press.