I thought it would be a good idea to put all of my reviews in one place. I’ve therefore created a Before the Blog review page where all of these reviews can be found. I will hopefully be able to say where it was first posted and when I read it.

Title – Not Another Happy Ending 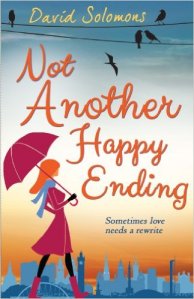 I received a copy of this book from the publishers via Net Galley in exchange for an honest review.

I have to admit that before I received this book I was not aware of the film on which it is based so came to read it without any preconceptions.

Jane is a struggling writer, receiving rejection letter after rejection letter in response to her first manuscript entitled ‘The Endless Anguish of My Father’. Tom is the publisher who is looking for the book that will establish his company amongst the big publishing greats. Initially rejecting Jane’s novel he agrees to publish it, so long as she agrees to extensive re-writes. Working together on the re-writes brings the two closer together until Tom changes the title of novel and the two no longer speak.

The book is launched and becomes a best seller, throwing Jane into the limelight, and leaving her with the pressure of writing an equally amazing second novel. However the angst and sadness that drive Jane to write her first novel have apparently disappeared, she has a new boyfriend, Willie, who is adapting her first novel as a screen play and has reconciled with her father who had walked out on her in her 7th birthday. With the new found contentment in her life she suddenly finds she has writer’s block and is unable to finish the second novel.

Meanwhile Tom needs Jane’s next book. His company Tristesse is nearly broke and he’ll have to sell if the book isn’t finished and released soon. He finds out Jane is blocked and realises that the only way to get her writing again is to make her miserable. So he starts out on his quest to restore writing order with his flatmate Roddy in a madcap plan that includes kidnapping her umbrella plant and starting a fight on a bus.

I have to say I really enjoyed this book. There were places where I laughed out loud, Roddy in particular had some of the funniest lines and he and Tom made a good comedy duo.

There were some parts where I could guess what was going to happen but this didn’t detract from the book, in fact I think I would have been disappointed if my surmises had been wrong!

This book was adapted from the screenplay of the same name. Whilst I can imagine this book as a film it wasn’t at the forefront of mind whilst I read it. Having read books that weren’t based on screenplays but obviously written in the hope that they would be one day and been distracted by it. Thankfully that wasn’t the case here.

This was a thoroughly enjoyable, light-hearted, romantic and funny read.