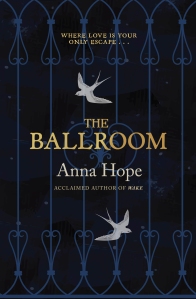 “By the acclaimed author of WAKE:

Where love is your only escape ….

1911: Inside an asylum at the edge of the Yorkshire moors,
where men and women are kept apart
by high walls and barred windows,
there is a ballroom vast and beautiful.
For one bright evening every week
they come together
and dance.
When John and Ella meet
It is a dance that will change
two lives forever.

Set over the heatwave summer of 1911, the end of the Edwardian era, THE BALLROOM is a tale of unlikely love and dangerous obsession, of madness and sanity, and of who gets to decide which is which.”
Read more here.

Ella Fay finds herself in Sharston Asylum, locked away for a minor incident. Her first instinct is to flee, then to fight. She quickly realises that biding her time may be the best way of surviving. In time she is allowed to go to the ballroom, where a weekly dance for the inmates takes place. There she meet John. When John meets Ella she awakens something in him he thought was long since lost. It is between the austere walls of the asylum that Ella and John can heal each other.

There is no doubt that this is a beautifully written novel. There is a fluidity to the language that is almost poetic. Anna Hope eloquently evokes images of the asylum and its inhabitants, both those forcibly kept there and those that are present through choice. The beauty of the surroundings juxtaposes against the fetid dormitories and treatments rooms, designed almost to cruely mock the inmates, the views of open spaces and nature that are fleetingly grabbed through barred windows a reminder of what they are missing.

The story focusses on four main characters, John, Ella and Clem are all inmates, Charles the doctor who attends them. Chapters are alternated between John, Ella and Charles with Clem remaining a presence that brings the story of the others together.  Then there is the character of Dan Riley who gives hope to John and Ella, making them realise that life can be different, if they just see themselves differently. These characters draw you into the story, are so real you can imagine them in front of you.

The novel is well researched and it shows in the writing. The treatment of those with mental illness in the early 20th Century was shockingly barbaric, as was the loose definition of mental illness. You could be interred simply for being poor and the shocking ideas behind Eugenics is also well discussed in the book.

There is melancholy and hopelessness weaved throughout the passages of this book. But there is also hope. John and Ella both find freedom from themselves when they find each other. Love awakens possibilities in them both, that they can be people they never were before, better for their time in the institution, no matter how horrendous the time spent there was. It takes a place that strips them of their dignity and rights, that made them feel worthless to realise just how much they do mean, to themselves and others.

I struggled with the first third of the book. The bleakness of the setting, the desperation and sadness of the inmates made it almost impossible to read. There were days that passed before I picked it up again. Then when I did, the pages would turn with ease and more of the story of John and Ella would be revealed.

This is not a light love story. It is heart-wrenching, anger-inducing, moving prose that is made all the more touching for the fact that it is inspired by Anna Hope’s great Grandfather. This is a beautifully written tale of love, hopelessness and how peace of mind can appear in the strangest of places.