Today I’m pleased to welcome author Rebecca Mascull to the blog. Rebecca is the author of The Visitors and her latest novel, Song of the Sea Maid was published by Hodder and Stoughton on 11 February 2016. Rebecca has written fabulous guest post about her editing process.

So, this is the process I go through when editing a novel, such as Song of the Sea Maid:

1. When I’ve finished writing the first draft, I would ideally like to shove it in a cupboard for six months and forget all about it. Then, take it out of the cupboard and read the whole thing through without a break, to see what it’s really made of. However, this is largely impossible because I have pesky things like deadlines to meet and bills to pay. Therefore, I get to leave it for a day or two, after which I read the whole thing through with plenty of breaks for irrelevant matters such as the school run or talking to loved ones. Or eating.

2. After I’ve had a first read through, I then start attacking it with a red pen. There will be hundreds of typos – largely because I rarely read through chapters as I go along – and there will also be great gaping plot holes that I didn’t notice when I was in the thick of the woods. I see a first draft as a lump of stone and I’m whacking away at it with a mallet, having lots of dusty fun wondering what the heck it’s going to look like when I’ve finished.

3. Then begins the horror that is the second draft. This has none of the fun, mystery and excitement of the first draft, a miraculous journey into the unknown. Don’t get me wrong: the first draft is hard work and exhausting, because it’s all thought and creative energy and pushing through the doubt in a kind of marathon. It is wonderful to finish the first draft, that brings with it an enormous sense of relief and accomplishment. But it’s also a joyful thing for me (though I know many authors who would soundly disagree). The second draft is all work, work, work. Dump this, reintroduce that; shift this, totally rewrite that. This is the chiselling bit – still hard work but more finely structural. This is also the stage where I get some experts in my period and themes and also trusted friends to read the first draft. For example, in Song of the Sea Maid, after a reading from an C18th expert, I discovered that a character was supposed to have married someone that in all likelihood he would never have considered marrying in C18th society, so I had to change his profession and thus all further references to that profession and insert scenes that reflected his new profession, all the while ensuring that these sweeping changes didn’t disturb the equilibrium of the rest of the narrative. It’s a scarily precarious house of cards, I tell you!

4. Then comes another read through after which it will be the finesse work: honing the poetry and perfecting such things as dialogue and first or last lines of chapters. This stage also includes putting words I overuse into Find and Replace to escape ridiculous levels of repetition. I’m particularly guilty of this with favourite words ‘pale’ and ‘cool’. I love these words so much I use them about hundred times each in my first drafts and then I have to go back and slice them all out. There will be a prize awarded (probably a box of Mini Smarties) to anyone who can find the words pale or cool used more than twice each in my first two novels…

5. By this point, I have either reached the state of perfection that is the world’s best novel ever written OR, more likely, I am so sick of finessing that I throw the damn thing down and in a huff email it to my agent. Now the fun really begins…

6. Thereafter, it goes through at least four more edits involving a minimum of four separate editors. [1] My agent [2] my line editor (and possibly an assistant editor) [3] my copy editor [4] the proof-reader. Each stage brings with it what at first feels like a million tiny cuts into that beautiful vision you had for your novel but you soon realise that in most cases these changes are very sensible and work brilliantly. In fact, what I realised very quickly during my first experience of being edited by the publisher was that, more than anything, I was so happy and honoured that anyone – let alone an illustrious publisher – would be interested enough in my work to go through it with a fine-toothed comb and to care enough to make it the best book it can be. Editors can save you from intense embarrassment too, such as my marvellous copy editor for Song of the Sea Maid who spotted that one character had had six sons who I’d completely forgotten about. I know what you’re thinking, that it must be quite difficult to mislay six sons  – SIX! – And they were tall, strapping fisherman the lot of them, even more difficult to ignore. But we novelists have a lot on our minds and often mislay our own children, let alone fictional ones… Furthermore, where you disagree with your editors, this forces you to defend your vision for the novel and so disagreements can be as fulfilling as agreements. For example, this can be as large as a complete plot shift to as small an item as – in Song of the Sea Maid – whether or not broccoli was available to eat in England in the 1740s. (And it was.) All in all, you end up with a few compromises, a few grudges (usually small ones) and much joy at having polished your novel in a marvellous joint enterprise.

7. Then, it goes out into the world, people read it and pull it to pieces – either with delight or derision – and there’s not a thing I can do about it. My book has to fend for itself now. And I’ve got to get on with the next one… 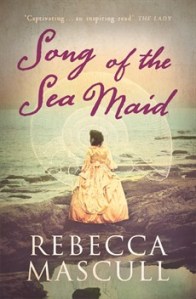 In the 18th century, Dawnay Price is an anomaly. An educated foundling, a woman of science in a time when such things are unheard-of, she overcomes her origins to become a natural philosopher.

Against the conventions of the day, and to the alarm of her male contemporaries, she sets sail to Portugal to develop her theories. There she makes some startling discoveries – not only in an ancient cave whose secrets hint at a previously undiscovered civilisation, but also in her own heart. The siren call of science is powerful, but as war approaches she finds herself pulled in another direction by feelings she cannot control.”