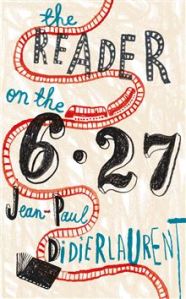 An irresistible French sensation – Mr Penumbra’s 24-hour Bookstore meets Amélie – The Reader on the 6.27 explores the power of books through the lives of the people they save. It is sure to capture the hearts of book lovers everywhere.

Guylain Vignolles lives on the edge of existence. Working at a book pulping factory in a job he hates, he has but one pleasure in life . . .

Sitting on the 6.27 train each day, Guylain recites aloud from pages he has saved from the jaws of his monstrous pulping machine. And it’s this release of words into the world that starts our hero on a journey that will finally bring meaning into his life.

For one morning, Guylain discovers the diary of a lonely young woman: Julie. A woman who feels as lost in the world as he does. As he reads from these pages to a rapt audience, Guylain finds himself falling hopelessly in love with their enchanting author . . .

The Reader on the 6.27 is a tale bursting with larger-than-life characters, each of whom touches Guylain’s life for the better. This captivating novel is a warm, funny fable about literature’s power to uplift even the most downtrodden of lives.”

I received a copy of this book from the publishers and this is my honest review of the book.

Guylain Vignolles dreads the journey to work every day. Working at a book pulping plant it breaks his heart to destroy the books that arrive by the lorry load. Each day on his way to the plant he reads aloud pages that he has saved from the machine. His fellow passengers have come to eagerly await Guylain’s latest discoveries. One day he finds the diary of Julie. As he reads these he finds himself falling for the mysterious Julie. But can he find the woman behind the words?…

I loved the premise of this book so when I heard about it I was eager to give it a read. I wasn’t disappointed. I was soon drawn into Guylain’s world. The book pulping machine, the bane of Guylain’s life, is aptly described as ‘The Thing’ by Guylain. It takes on a personality of it’s own, becoming a malevolent presence and leading to the reader to easily distain it as much as Guylain.

There is a magical quality to this book, one that I have noticed is present in other French literature I have recently read. It casts a lovely spell over the reader, delighting them as Guylain does with his fellow passengers on the 6.27. That magic is transported to the retirement home where Guylain reads, waking up the residents from their stupor. Similarly the words of Julie open up Guylain’s world, making him realise his lonely existence may not be a permanent one.

Ros Shwartz again does a fantastic translation. My opinion is that if I forget I’m reading a translation then the translator has done their job perfectly. The magic that was behind the author’s words has been retained and it is that which holds the story together.

This book celebrates the magic of words and of story-telling. It’s a beautiful tale about the love of books and how they can open up new avenues and adventures for readers. Perhaps even leading to love.