Today I’m pleased to welcome Joanna Courtney to the blog. Joanna’s novel, The Chosen Queen, the first instalment in ‘The Queens of the Conquest’ trilogy was published by Macmillan on 7 May 2015. Today Joanna answers the question – what is it with Queens?

What is it about queens?

What is it about queens that fascinates us so much? What is it about the ‘virgin’ Elizabeth I, or the heartbroken widow, Victoria, or the beautiful Kate Middleton? Is it the money, the pretty dresses, the handsome princes? Or is the power, the status, the wonderful, irresistible desirability of the position? It has to be all of that, but for me as a writer the true fascination is not so much how different queens are from us ordinary folk, as how similar they might be. Beneath the crown is surely, still, a human being and in some ways being set on a throne makes them even more vulnerable than the rest of us.

It was with that in mind that I excitedly uncovered the story of Edyth of Mercia. Born the daughter of the Earl of Mercia in the 1040s, she was catapulted into the wild Welsh court when her irascible father was exiled and at just 14 was married to King Griffin, the only man ever to have been King of all Wales. Griffin’s favourite hobby was attacking England and it was this that, in the end, proved his undoing. The great Earl Harold of Wessex attacked Wales, eventually bringing Griffin’s head to England on a platter, and his widow, Edyth – still just 25 and already mother of three – with it.  Before long, on the cusp of 1066, he asked her to marry him.

Now King Harold, he desperately need help to hold England against the fearsome invaders Harald Hardrada and William of Normandy and Edyth, as sister to the earls of the north and an experienced ruler already, was the perfect choice. She was already pregnant with a son in the fateful year of 1066 and was viciously widowed at the Battle of Hastings before this poor lost Harold was even born.

I began to think about the sort of fiery, curious, bold young woman who could have carved her way through such a political and personal minefield. I wondered how I would have managed it and, as I did so, I made the most of that great privilege of the historical novelist – to imagine a character who

slots into history and makes it her own. As a result my Edyth is in part a product of her time (I did a lot of research, though cannot claim expertise) and, in a perhaps larger part, a product of my imagination.

I am so caught up in her story these days that I have recently named my new car after her! Edyth was a true royal with all the money, pretty dresses, and status that we more usually associate with the Tudor elite, but for all that I hope that for readers she can fascinate as much as a woman, as she can as a queen. 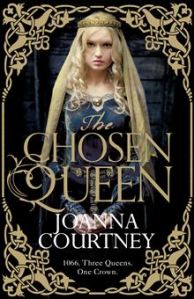 He looked like a king that day, Harold. Even in a simple bridegroom’s tunic of darkest green he looked like royalty as he stepped up to take the Lady Svana’s hand. There was no gold in sight, just flowers; no parade of bishops, just a smiling monk in a sack-robe and bare feet. There was no betrothal contract, no formal prayers, no exchange of lands or elaborate gifts, just the linking of hands joining two people for a year and a day.

Edyth had said nothing but it had seemed to her then that Harold glowed when he was with his handfast wife and it was that glow, more than any gold or land or title, that drew people to him. ‘Love prefers to be free,’ Svana had said and Edyth had carried that with her ever since. It had been her ideal, lit up by firelight and scented with meadow grass, and now, on the brink of womanhood, she craved such a passion for herself.

The Queens of the Conquest trilogy

As a young woman in England’s royal court, Edyth, granddaughter of Lady Godiva, dreams of marrying for love. But political matches are rife while King Edward is still without an heir and the future of England is uncertain.

When Edyth’s family are exiled to the wild Welsh court, she falls in love with the charismatic King of Wales – but their romance comes at a price and she is catapulted onto the opposing side of a bitter feud with England. Edyth’s only allies are Earl Harold Godwinson and his handfasted wife, Lady Svana.

As the years pass, Edyth finds herself elevated to a position beyond even her greatest expectations. She enjoys both power and wealth but as her star rises the lines of love and duty become more blurred than she could ever have imagined. As 1066 dawns, Edyth is asked to make an impossible choice.

Her decision is one that has the power to change the future of England forever . . .

The Chosen Queen is the perfect blend of history, fast-paced plot and sweeping romance with a cast of strong female characters – an unforgettable read.”