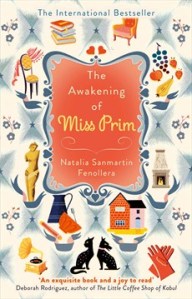 “Miss Prim, a librarian, comes to the village of San Ireneo de Arnois, a place more eccentric and enlightening than she’d imagined. A delightful tale of literature, philosophy and the search for happiness.

Prudencia Prim is a young woman of intelligence and achievement, with a deep knowledge of literature and several letters after her name. But when she accepts the post of private librarian in the village of San Ireneo de Arnois, she is unprepared for what she encounters there. Her employer, a book-loving intellectual, is dashing yet contrarian, always ready with a critique of her cherished Jane Austen and Louisa May Alcott. The neighbours, too, are capable of charm and eccentricity in equal measure, determined as they are to preserve their singular little community from the modern world outside.

Prudencia hoped for friendship in San Ireneo but she didn’t suspect that she might find love – nor that the course of her new life would run quite so rocky, would offer challenge and heartache as well as joy, discovery and fireside debate.”

Miss Prudencia Prim, seeking a new challenge, applies for the role of Librarian in the village of San Ireno de Arnois. Despite the fact that the advertisement specified no qualifications, and the fact that Miss Prim has her fair share of degrees, she is offered the post. She soon discovers that the villagers and her employer will have a lasting effect on her life. Miss Prim, a librarian, comes to the village of San Ireneo de Arnois, a place more eccentric and enlightening than she’d imagined. A delightful tale of literature, philosophy and the search for happiness.

The main focus of the story is the relationship between Prudencia and her employer. We only ever know him as ‘the man in the wingchair’ and he challenges Prudencia’s ideas on literature, dismissing her beloved Austen and snubbing Little Women. He raises his nieces and nephews in a way that is alien to Prudencia at first, teaching them Latin, Ancient Greek, Philosophy and Theology. The children appear quite strange to her in the beginning. However the time she spends with them makes her aware of the fact that there ways of living and loving other than the norm.

The village itself has a mystical charm to it, much like the story. There is obviously something outside the norm about the residents and as the story unfolds Prudencia learns more of how the village was founded, and how it has evolved.

One of the main ways Prudencia awakens is her eyes are opened to love, and the idea of marriage. After seeing her parents marriage she had always told herself such a relationship was not for her. When the village Feminist Society decide to find her a husband ,she at first balks at the idea. Then, as she discusses it with her friends and thinks more on the situation, she becomes aware of the reasons for her opposition to matrimony and explores her feelings to find out what she truly wants.

There is a surreal, mystical air to the story. It is shot through with little philosophical ideas and sly observations. Some things are brought closely into focus, for example Prudencia is clearly the main character. Others seem to be more obscure and dream like. Prudencia’s employer is only ever referred to as ‘the man in the wingchair’ giving him the feel of some type of wil o’ the wisp.

Whilst reading this book I was reminded of Jane Eyre. No there is no Bertha in the attic, but the transformation of a person, as Jane emerges from Lowood attendee to a strong, capable, independent woman, is mirrored, albeit in a different way, by Prudencia. The interactions and arguments between Prudencia and ‘the man in the wingchair’ reminded me of the conversations Jane would have with Rochester and both are clear in their love of such debates.

An enjoyable story, that much like the village and its inhabitants to Prudencia, works its magic on you.

* I have a copy of The Awakening of Miss Prim to give away. Simply leave a comment to enter. UK only this time I’m afraid. Closes 9pm Friday 16 January. *