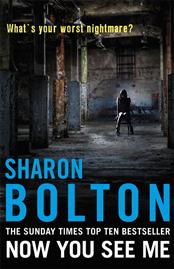 “She can’t stop shivering. But this isn’t cold. This is terror.

A savage murder on London’s streets, 120 years to the day since Jack the Ripper claimed his first victim. A crime with all the hallmarks of a copycat killer.

Detective Constable Lacey Flint has never worked a murder case, until now. When another mutilated victim is found she agrees to be the bait to lure out the monster.

But this killer is one step ahead, and already fixated on Lacey . . .”

DC Lacey Flint finds more than she bargains for one night as she walks back to her car. There waiting for her is a woman, dying from injuries too gruesome to contemplate. Lacey soon finds herself drawn into her first murder investigation, as a witness, expert and to some suspect. Soon a second body is found and Lacey finds herself caught up in something that could ruin her forever.

This is the first in the Lacey Flint series and the first book I have read by Sharon Bolton, who previously wrote under the name SJ Bolton. I found this to be an engaging murder novel. It’s no plot spoiler to say that the murderer is inspired by Jack the Ripper. There have been many Ripper spin offs but this deals with the tale of Jack and his victims in an original manner.

There are a good host of supporting characters, each one different enough to add their own weight to the story. The character of Lacey is a complicated one and one I am not sure I completely took to. She has her own demons and secrets to keep but these are what drive her as an officer and make her the person she is. It seemed to me that this first novel in the series is a vehicle to introduce us to Lacey and I have a feeling that this back story will be integral to the rest of the series, though I may be wrong. This is why I wanted to read the series in order, despite having books three and four in the series which I am impatient to read. I’m looking forward to seeing how Lacey develops as an officer and to see how the relationship between her and her fellow officers develops, in particular if romance is to rear its head with her and DI Joesbury.

Yes I did guess the murderer before the denouement but this didn’t spoil the story. In fact I found myself flying through it, eager to see what would happen next. The pace was just right and kept me engaged throughout.

I’m looking forward to reading the next in the series Dead Scared soon.