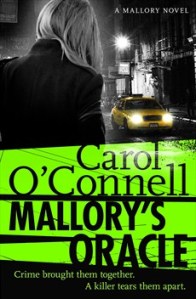 “The international bestseller that introduced NYPD detective Kathy Mallory in the case of investigating the murder of her adoptive father, Louis Markowitz.

Detective Kathy Mallory. New York’s darkest. You only underestimate her once.

When NYPD Sergeant Kathy Mallory was an eleven-year-old street kid, she got caught stealing. The detective who found her was Louis Markowitz. He should have arrested her. Instead he adopted her, and raised her as his own, in the best tradition of New York’s finest.

Now Markowitz is dead, and Mallory the first officer on the scene. She knows any criminal who could outsmart her father is no ordinary human. This is a ruthless serial killer, a freak from the night-side of the mind.

And one question troubles her more than any other: why did he go in there alone?”

Kathy Mallory is no ordinary police officer. Taken from the streets when she was a child and raised by cop Louis Markowitz and his wife Helen, she still retains many traces of her life on the streets. Her moral compass has been influenced only by Helen, no dead. She has no compunction about straying outside the lines of right and wrong to get what she wants. And what she wants at the moment is to find the person who has killed Markowitz, and with it the last family member she has.

On compassionate leave and aided by family friend Charles, she continues to investigate the serial killer who has been slaughtering elderly ladies.

This is the first in the Kathy Mallory series which have been re-released by Headline, and the first Carol O’Connell book I have read. Mallory’s Oracle is a gritty, New York based crime novel and a good introduction to Kathy Mallory. She is hard to get close to, that is often said about her by other characters and the author has certainly drawn her that way. She has the ability to push people away from her with just a look, but can easily turn on the charm when it suits her needs. She has rare moments of kindness, but people who witness them seem to value them before because of the very fact they are rare in nature. There is a lot to dislike about Mallory, but yet I wasn’t put off enough by her for the story to be tarnished for me. She is a dark creature, with a slightly off moral compass and her own version of right and wrong and whilst a lot of this is due to her nature, some will also be due to her history of abuse and abandonment, hinted at throughout the story. There is a lot more to the back story of Mallory to be seen and I’m sure this will become more apparent as the series continues.

The mystery itself is engaging, though it could be confusing in places as it is very much based on the US legal system, which is of course different to our own. It is always hard to comment about the actual crime/mystery angle of a novel in a review as I don’t want to give too much away. However the multiple strands of murder, stocks and shares and mediums, together with the history of Markowitz and Mallory all collaborate to create an engaging story.

I would probably view this novel as more of an introduction to the characters as a set up to the rest of the series as I certainly want to read more to find out how those characters develop. I would love to see some form of relationship develop between Mallory and Charles, who was my favourite of the side characters, though given Mallory’s personality I doubt this will happen.

I’m looking forward to reading the next Mallory book, The Man Who Lied to Women, soon.