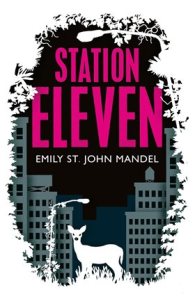 “DAY ONE The Georgia Flu explodes over the surface of the earth like a neutron bomb. News reports put the mortality rate at over 99%.
WEEK TWO Civilization has crumbled.
YEAR TWENTY A band of actors and musicians called the Travelling Symphony move through their territories performing concerts and Shakespeare to the settlements that have grown up there. Twenty years after the pandemic, life feels relatively safe. But now a new danger looms, and he threatens the hopeful world every survivor has tried to rebuild.
STATION ELEVEN Moving backwards and forwards in time, from the glittering years just before the collapse to the strange and altered world that exists twenty years after, Station Eleven charts the unexpected twists of fate that connect six people: famous actor Arthur Leander; Jeevan – warned about the flu just in time; Arthur’s first wife Miranda; Arthur’s oldest friend Clark; Kirsten, a young actress with the Travelling Symphony; and the mysterious and self-proclaimed ‘prophet’. Thrilling, unique and deeply moving, this is a beautiful novel that asks questions about art and fame and about the relationships that sustain us through anything – even the end of the world.”

I received a copy of this book from the publishers and this is my honest opinion of it.

The Georgia Flu has swept the globe. Deadly in its impact once caught, people die within 24 hours. Estimates give the death toll as over 99% of the world’s population. Soon civilisation as we know it has disappeared. The survivors live in a world without electricity, motorised travel, social media or medicine. There is the daily threat of being killed by marauders or succumbing to the ravings of a prophet.

The story focusses on the lives of the Travelling Symphony, 20 years after the pandemic, alternating with scenes from just before the collapse. As the story develops so does the relationship between the two times and the lives of six characters.

One of the reasons is that I haven’t read any dystopian fiction before so I have no point of reference. It is a novel that is both unlike anything I’ve read before but has the style, character development and story-telling that is recognisable in any well written book. The characters are all well-rounded individuals, faults are not shied away from, idiosyncrasies as well as strengths are well portrayed.

The human’s mind for imagination is amazing, the world that Emily St John Mandel has made in Station Eleven is a shining example of this. Mandel has created a world that is unfathomable but yet plausible. Who knows how any of us, as humanity, would react and survive if the end of the world occurred.

The short chapters, dedicated to a point in time either before or after the pandemic are perfectly paced. This is not an overly short book at 384 pages but it is a quick read. I’d pick it up to read a few pages and find that nearly a quarter of the book had flown past my eyes.

This book is many things, a tale of survival after the unthinkable, survival after the deaths of loved ones, hopes for the future and regrets from the past. It is also an indictment on today’s society, how much we rely on social media, technology, medicine, politics and law and order. It is a story of how much we take for granted, how much we feel we need, and what we actually do need to survive the world we live in, and ultimately how little we need to be happy.

I look forward to reading more from the creative mind of Emily St John Mandel in the future.