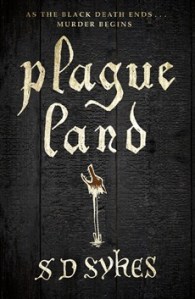 “A thrillingly suspenseful crime novel set in medieval Kent in the aftermath of the Black Death.

Oswald de Lacy was never meant to be the Lord of Somerhill Manor. Despatched to a monastery at the age of seven, sent back at seventeen when his father and two older brothers are killed by the Plague, Oswald has no experience of running an estate.

He finds the years of pestilence and neglect have changed the old place dramatically, not to mention the attitude of the surviving peasants.

Yet some things never change. Oswald’s mother remains the powerful matriarch of the family, and his sister Clemence simmers in the background, dangerous and unmarried.

Before he can do anything, Oswald is confronted by the shocking death of a young woman, Alison Starvecrow. The ambitious village priest claims that Alison was killed by a band of demonic dog-headed men. Oswald is certain this is nonsense, but proving it – by finding the real murderer – is quite a different matter.

Every step he takes seems to lead Oswald deeper into a dark maze of political intrigue, family secrets and violent strife.

And then the body of another girl is found.

SD Sykes brilliantly evokes the landscape and people of medieval Kent in this thrillingly suspenseful debut.”

I received a copy of this book from the publishers and this is my honest review.

Oswald de Lacy finds himself uprooted from the monastery he has lived in for most of his life when he is called back to govern the family estate after the Plague has killed his father and two brothers. At 18 he is inexperienced in the ways of running a manor and lands and struggles with his new responsibilities. Things aren’t helped with his mother and sister interfering. Luckily he takes with him his ally from the monastery, Brother Peter, to support him in his new endeavour.

Mistrust is rife and workers for the estate are fewer now that the Plague has done its worst. The fear of the disease still hangs in the air and strangers are regarded with fear.

Soon after Oswald returns the body of a local girl is found. The local priest soon claims it was the work of dog-headed men, fuelled to do so by some unknown agenda. However in the minds of the locals, the fear and mistrust manifests itself in the believe in witchcraft and demons and many are more inclined to believe the priest, than Oswald’s assertions that a mortal was the real culprit. Oswald sets out to find the real murderer, finding another body and more about himself on the way.

I love a good historical crime novel, being a great fan of Ariana Franklin and CJ Sansom so I was looking forward to reading this when I heard about it.

The characters are well drawn. Oswald starts out naive and inexperienced and this shows through his investigation. Mistakes are made and these have devastating consequences. However we see Oswald mature and develop into a strong character.  His mother is somewhat of a harridan and pain to say the least but she too has surprises under the surface. As for Clemence, Oswald’s sister, she is depicted as a quite horrible person. The relationship between her and Oswald is somewhat strained. However as the story develops so does the back story of these characters.

The mystery is engaging and again, although I got who the murderer was before the reveal, it carried me along for quite some time before the penny dropped.

I also loved the time period of the novel. I found the whole subject of the Plague and the feudal system fascinating. It’s a period of history I wasn’t familiar with but one I’d love to investigate further.

This book fills the gap between the late Ariana Franklin and CJ Sansom and I look forward to reading more of the adventures of Oswald and company.