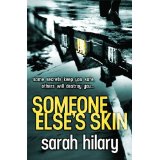 I received a copy of this book from the publishers in exchange for a honest review.

“Some secrets keep you safe, others will destroy you…

Detective Inspector Marnie Rome. Dependable; fierce; brilliant at her job; a rising star in the ranks. Everyone knows how Marnie fought back from the murder of her parents, but very few know what is going on below the surface. Because Marnie has secrets she won’t share with anyone.

But then so does everyone. Certainly those in the women’s shelter Marnie and Detective Sergeant Noah Jake visit on that fateful day. The day when they arrive to interview a resident, only to find one of the women’s husbands, who shouldn’t have been there, lying stabbed on the floor.

As Marnie and Noah investigate the crime further, events begin to spiral and the violence escalates. Everyone is keeping secrets, some for survival and some, they suspect, to disguise who they really are under their skin.

Now if Marnie is going to find the truth she will have to face her own demons head on. Because the time has come for secrets to be revealed…”

D.I. Marnie Rome knows what it’s like to suffer loss. Her parents were murdered 5 years ago and since then she has used her grief and guilt to climb the ranks in the police force.

Together with D.S. Noah Jake she is investigating Nasif Mirza, a brutal man who is wanted in connection with an attack which left a man without his hand. This leads them to a women’s refuge where Mirza’s sister is hiding after an attack by her brothers left her blind in one eye. On arriving at the refuge Rome and Jake find one of the resident’s with a bloody knife in her hand, her husband lying stabbed and dying on the floor.

As Rome begins to investigate things soon emerge to be not as clear cut as they initially seem. Two of the women from the refuge disappear, with a third soon to follow. In a race against time to find the missing women Rome has to deal with someone who thrives on pain, come face to face with her own prejudices and try to let go of the ghosts that still haunt her regarding her parents and their killer.

This is the crime debut of Sarah Hilary, who has previously won awards for her short stories, and with it she brings us a new rising star in crime fiction.
I enjoyed this book immensely. It was gripping, thought provoking and disturbing. The ensemble of characters were well written, all fitting into the story and I found myself hoping that they would return in the next instalment. If I wasn’t reading it I was wanting to, and when I was reading it I was in that position most of us find ourselves in when we are reading a good book – wanting to read it to find out more, but not wanting it to end. If all the crime novels I read this coming year are half as good as this I’m in for a treat.

Yes, I had guessed how the story would progress before it was revealed in the book, but that didn’t take away from my enjoyment. This tends to happen with the vast majority of crime fiction I read, and given that the bulk of my reading is taken up by this genre guessing the storyline and twists is part of the fun.

Sarah Hiliary has written about a topic that is often shied away from and has dealt with it in a way that is both sensitive, enlightening and shocking. Though Rome has her dark moments, secrets she keeps under her skin, she makes a refreshing change from the dour, borderline alcoholic leads in crime novels that are regular layers in crime novels. She has her own demons to contend with, the story of her parents’ murders and her relationship with her foster brother is a theme that will carry on through the series.

In Marnie Rome, Sarah Hilary has created a new force to be reckoned with. I can easily see this series being made into a TV series, only hopefully, if this does happen, TV execs will do themselves a favour and keep Rome and her colleagues as they are in Someone Else’s Skin.

The great thing about discovering a new author and a new series of novels is that you have the next book in the series to look forward to. The bad thing about it is the wait until the new novel is published. I am impatiently waiting for the next Marnie Rome novel.